I decided to use the rules Song of Drums and Shakos (SDS), which are simple to teach, but give the player tactical choices to make, so it not simply a die-rolling contest. (It is, however, more susceptible to luck than the average game.)


The British have sent a small patrol forward, consisting of six British line infantry and one King's German Legion Light Dragoon, to patrol down the road looking to clear away any French skirmishers as the battalion is marching down the road. The French figures are hidden and initially kept off of the board. However, they are marked on a map to show where they are hiding. The figure below shows the terrain, deployment, and where the French are hiding. 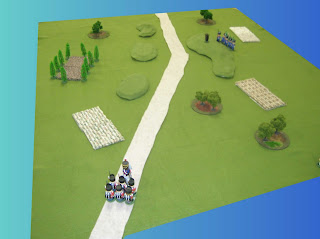 The small light colored patches are crops and high grass areas. In the game they act as minor concealment (+1 to the target in ranged combat), but do not block line of sight. The round wooded area as small copses of woods, which completely block line of sight, figures cannot be seen unless they are within 1" of the edge, and the target gets +2 in ranged combat). The hills completely block line of sight if the line crosses any part of the hill, no matter whether the figure sticks above the terrain or not. (I hate "laser pointer" line of sight where people have to get their eye down to the table. It inevitably leads to disagreement, even if it ends in a friendly die roll as to who is right. Better to simply take a thread from head to head and see where the line crosses.) 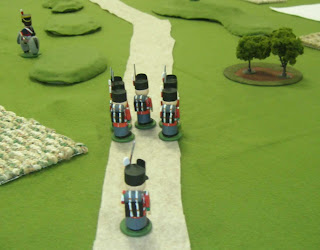 The British advance down the road, with the Light Dragoon taking off looking behind the hills to the left of the road. At this point, it is certain that not more than one or two figures are hiding behind hills on the left flank, although the French may be hiding in the far left corner woods, but it is more likely that they are on the right.

Corporal Jones gets left behind a bit from his squad.


I allow figures other than officers to be Leaders, a change from the straight SDS rules. This move also shows what I like about other Ganesha Games (GG) rules: the Leader frequently falls behind the men. I think the Leader should be able to activate, give the order to the group to move out, and then forgo all remaining actions in order to move with the group. In essence you are rolling to give an order, then rolling for the Group plus Leader to act. Of course, I think that should be an option so they Leader can act either way. 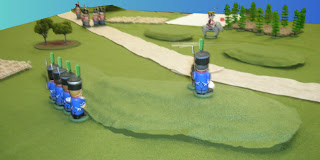 One Frenchman reveals his position as he climbs the hill and takes a pot shot at the Light Dragoon from behind a bush, to no effect. The rest of the squad moves left around the hill, still out of sight. (I have revealed them here for convenience.) 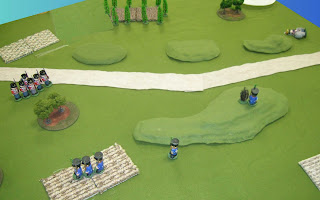 The action continues with the French Legere moving to the left into the field, while Corporal Jones marches his boys into the woods, where there is better cover. Meanwhile, on the French right flank ... Chasseur LeBon shoots at the Trooper Liebenow (of the Kings German Legion Light Dragoons, hence the funny name), and his horse bucks and rears. This would not be the last time that the ornery beast could not be controlled in battle... 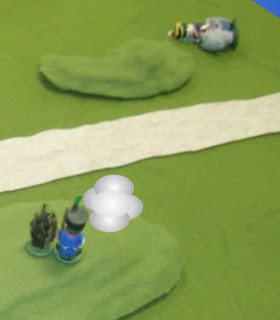 With the French in position, Lieutenant Louis Lebau orders his Chasseurs to fire on the British infantryman still exposed ... and he goes down! 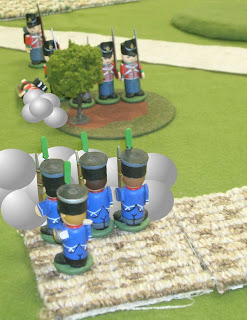 One of the reasons that I don't do a turn-by-turn and blow-by-blow description of the action is that the British had this unfortunate tendency to fail to activate, so the picture would not change ... until the French did something. Chris (Corporal Jones) was not getting good dice while Dean (Lieutenant Lebau) was doing alright.

Trooper Liebenow finally got his mount under control and put the spurs to it, almost appearing on the flank of the French. Chasseur LeBon, left behind in the dust was heard to mutter "Wow! Chevau-légers déplacer rapidement!" (Roughly: "Wow! Light Dragoon move fast!") 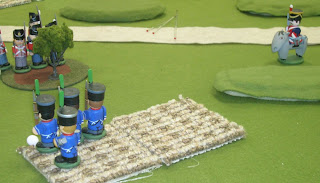 Note that although you can see the Light Dragoon in the picture, line of sight does not extend across the hill, so the trooper is hidden from view. But, they can hear him coming!

The British finally come alive, now that Corporal Jones has his lads in hand, and a devastating volley erupts from the woods with a Chasseur going down. Meanwhile, the trooper canters over the woods, ready to charge into the rear of the French and put an end to this ambush.

But, the British were over-eager and another devastating volley from the French Legere killed another British private and knocked another to the ground. Lieutenant Lebau, seeing the trooper approaching, rushes forward and shoots his pistol four feet from the horse's nose. Again, the horse bucks, distracting the trooper from battle.

Knocking a figure down can represent a number of different events, not just literally knocking them off of their feet down to the ground. They could be dazed, off balance, or trying to control an unruly mount. However, no matter how the result is interpreted the game effect is the same. It takes one action to recover, and if your opponent simply beats you (rolls higher) in combat, you are out of the fight.

With Chasseur LeBon huffing and puffing as he brings up the rear, things look bad for the trooper. He takes a shot and ... misses! The trooper controls his mount once again while Corporal Jones screams at Private Smythe to get up off of his arse and for everyone to reload.

Another volley by the Chasseurs is also ineffective - that woods is proving tough to overcome - but the Light Dragoon trooper is finally dispatched. Chasseur LeBon attacks from the rear and the trooper's horse kicks the sneaky Frenchman to the ground, but the Lieutenant's sword finds its mark. 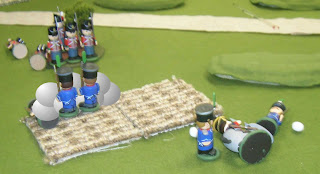 Roaring to LeBon "descendre ton cul", Lieutenant Lebau flinches as the British volley roars again. With a scream, another Chasseur goes down. 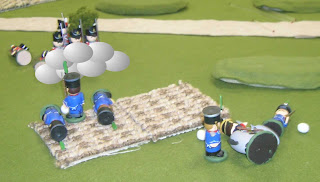 Chasseur LeBon gets up and he and Lieutenant Lebau rush to the field just as another fierce roars sounds. The British, ever the experts at musketry, have started methodically going through the drill: open the cartridge, fill and close the pan, load the barrel with powder and ball, ram the charge home, return to the firing position, cock the hammer, level, and fire. The French can take no more and Lieutenant Lebau can be seen here slapping the bottom of Chasseur LeBon with his sword berating him for taking so long, while failing to kill the Light Dragoon. Surely his shirking his duty was the cause for their failure! 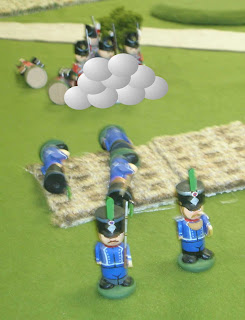 
This game played very well with the two players - both whom had never played SDS - quickly grasping the rules and getting into the action. That, of course, is the best sort of rules for gaming conventions where everyone wants to get stuck in right away.

I think the figures themselves were also a success. They certainly elicited a lot of comment and discussion before, during, and after the game. The only problem I see is that as a figure gets taller is becomes less balanced. This is really only a problem with hills, which continue to be my nemesis, when it comes to terrain.
Posted by Dale at 8:53 PM