People have made armies out of these, in lieu of using the hair rollers of bygone days. But for what I am doing, I want to show using them for details on smaller figures. For example, guns on my minimalist WW II figures are typically simple mini-dowels – straight, round sticks – and any detail I want shown has to be added with dimensional paint. Using granny grating, however, I can cut out simple shapes and simulate SMGs, bolt guns, long rifles, etc.

Best of all, the complex shape of the Japanese LMG can be recreated. I find it better to use a Sharpie permanent marker to draw the basic shape, so I know where to make the cuts. 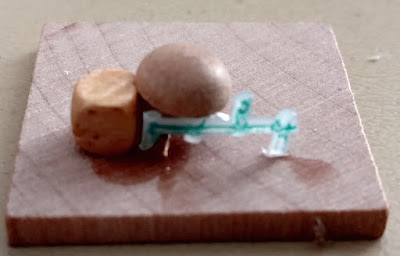 This little guy will be a prone trooper firing his LMG off of the bipod. You can see the distinctive features, like the magazine protruding from the top of the weapon (similar to the Bren gun).

Granny grating is easily cut, being nylon. Use a very sharp blade to get rid of the 'strings' that tends to come with working on nylon.

Of course, using granny grating is not limited to the little guys. You can use it for larger figures, like an engine ventilation cover on a vehicle, or even as floor grating for terrain. Like everything we show here, it is just another tool in your box to try and convey the shape of what you are trying to model.
Posted by Dale at 9:22 AM 4 comments:

Saxon Fyrd Unit and Entire Wing of Battle of Hastings

Finally finished the Saxon Fyrd unit I was working on which finishes off one wing of the Saxon line for the Battle of Hastings game.  Nothing new, but here it is anyway. 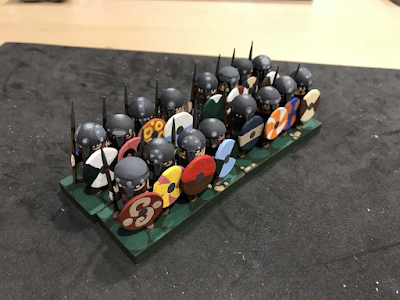 That means that I've finished one entire wing of the battle for each side.  Here are some shots of the left wing/right wing of the Norman/Saxon lines for the Hastings game I'm working on. 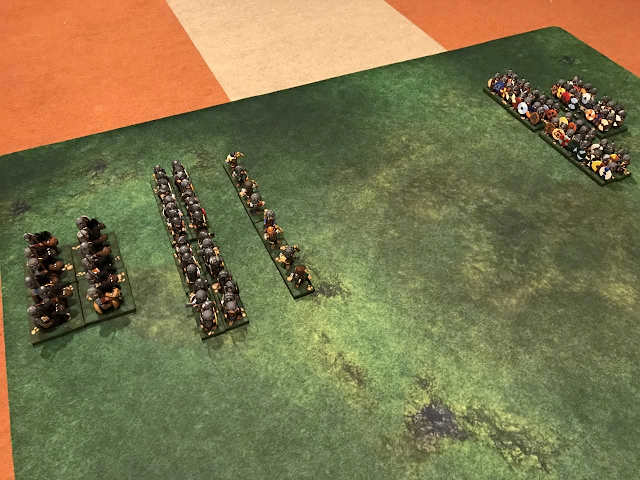 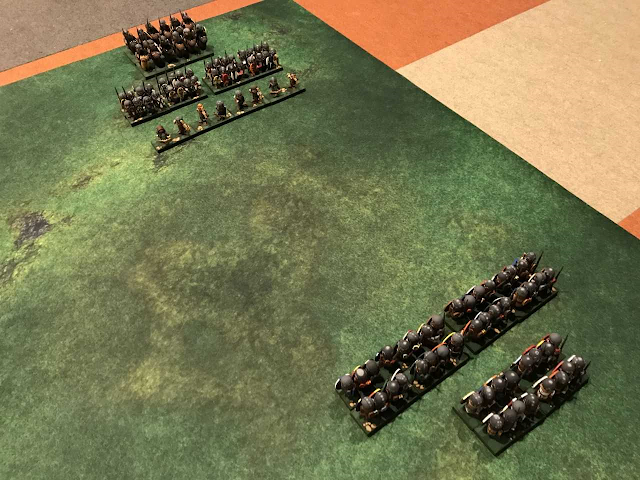 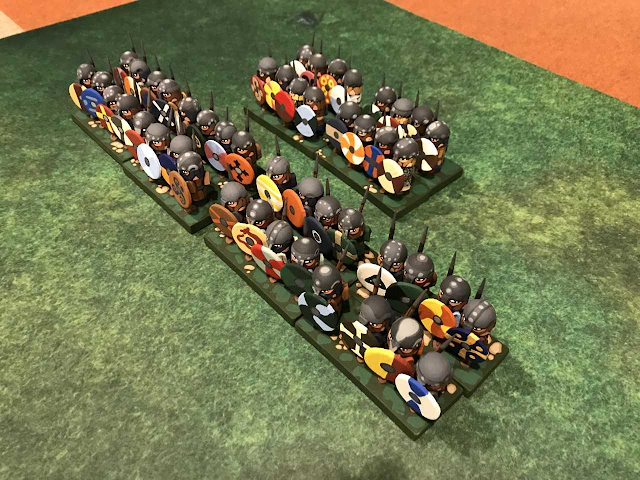 The Fyrd right wing of the battle line. 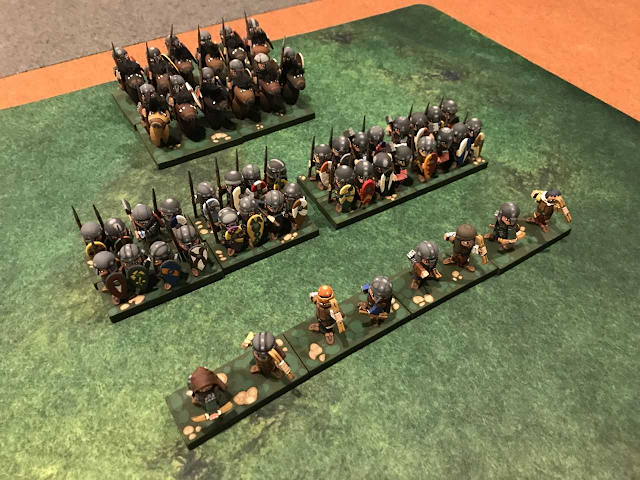 The Breton (Norman) left side of the battle line which you've already seen, but I thought I would post another picture anyway.


Onto the first half of the middle, which for the Normans means a repeat of the above units and for the Saxons two more Huscarl units (I did the first one a while back).
Posted by GrayMouser65 at 3:59 PM 6 comments:

Sometimes it is not how long a project takes to complete, but how long it takes to get started. I crafted my WW II USMC/USA 1941 troops way back in January 2017. The idea was to create a small force – one infantry platoon in defense and two platoons in attack – so I could play a test game of Peter Pig's Poor Bloody Infantry (PBI) and see if I liked it.

I love the last line of that blog post:


Next up, the special figures of the USMC and the start of the Japanese SNLF platoon.

Yeah, that was almost two years ago that I was going to start my SNLF project. Like I said, what matters is how long it takes to start a project because making and painting your own figures is quick and simple. Once you start, that is. 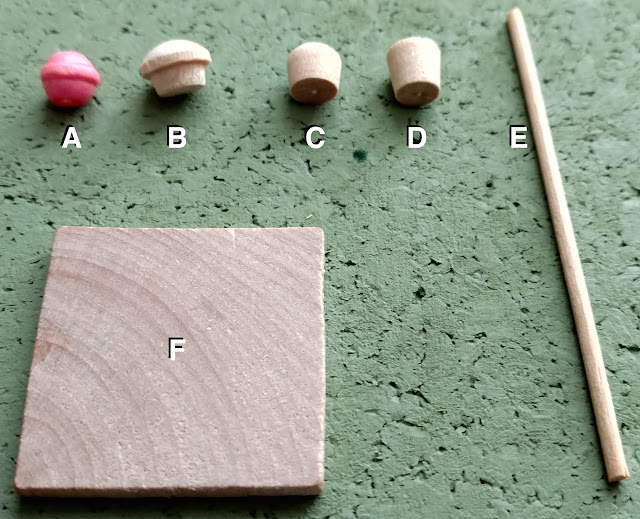 The picture above shows the parts that I used.

You can see the build is really simple for the riflemen. Glue the button head plug on top of the bead for the body and add a 1/2" piece of dowel for the rifle. I use dimensional paint to create the arms and hands.

As you can see – or maybe not, as it is a little dark – the color scheme is very simple. The helmets are a light green (I have seen all kinds of colors for this) and a medium jungle green for the trousers and jacket. Although it might seem silly at this scale (12mm to the eyes, but chunkier) I always try and get the weapons correct. The Japanese Arisaka Type 99 rifle had a metal bolt mechanism and barrel, but the area between the bolt and the end of the barrel was covered in wood. 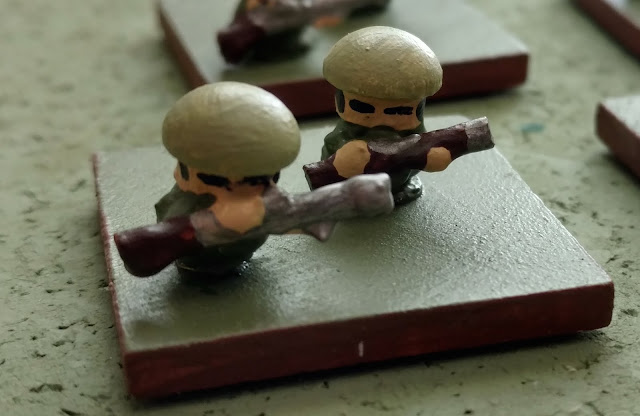 The Type 99 Light Machine Gun was also made with the dowel, but was 3/4" long and uses a lot more dimensional paint to represent the gun stock, bipod, muzzle, and carrying handle. I do not have the distinctive magazine sticking out of the top. The next platoon I build with have the gunners in the prone position, so that detail will be present. The build for the figure itself is the same as for the rifleman. 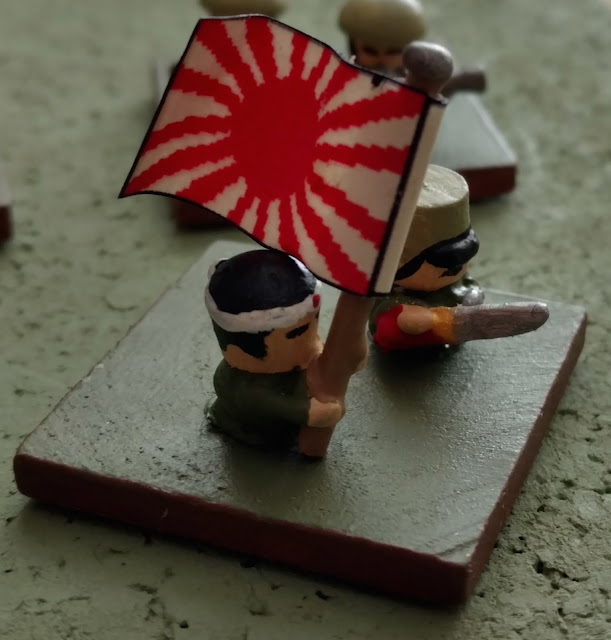 The standard bearer uses the round head plug for the head, but the same bead for the body. The flag is from http://www.warflag.com and is simply glued on to the dowel.

The officer uses the flat head plug, flipped upside-down, for the head. A small piece of dowel, shaved flatter, is used for his katana, and the pistol is simply formed from dimensional paint.

Here is the whole platoon, six rifle stands, three LMG stands, and one command stand. I need to make some casualty markers, and of course another whole platoon. Hopefully this time it won't take me another year to start!
Posted by Dale at 1:08 PM 4 comments: