I played in a convention game this past fall and the DM used a pre-painted D&D/Pathfinder miniature that I had never seen before but absolutely loved.  It was a miniature for a black pudding, which although the name is silly sounding, it is an absolutely terrifying monster.  I immediately fell in love with the miniature and went out and purchased one just to have one.  Here it is. 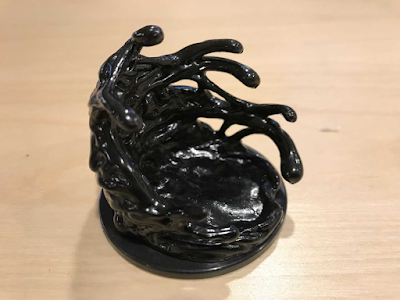 Very cool, right?  Then I decided to see if I could do a crafted version.  I knew that I couldn't do straight hot glue.  It is too hot and even when you apply it on top of cooled hot glue, it melts the cooled glue and you have great difficulty getting "height" to the figure (which is important in this case) unless you end up using a lot of hot glue, which I didn't want to do.  Not only that, I think if I was able to do it with just hot glue, it would end up being way too big of a figure for what I was looking for.

I decided to try to create a skeleton frame for the general shape of the black pudding with paper.  I cut several pieces to shapes that I wanted and then glued them (with PVA glue) to a wooden precut round thin wood piece as a base.  After it dried, I shaped the paper even more to make the pod like arm structures and such and to create as much movement in the miniature as I could.  Finally, I covered it all with hot glue hoping that the paper would provide enough of a foundation to support the glue so that I wouldn't have to use too much glue, and that the pods and such would still be thin enough.  It worked!  Here is the painted craft version (black base coat, soft black [dark umber brown] dry brush highlights. 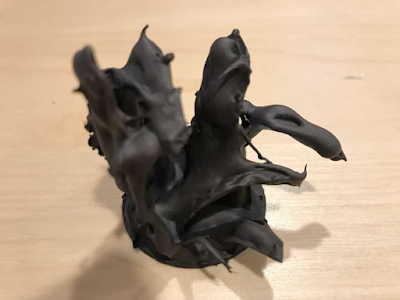 Turned out pretty good I think, I'm happy with it.  Here they are side by side. 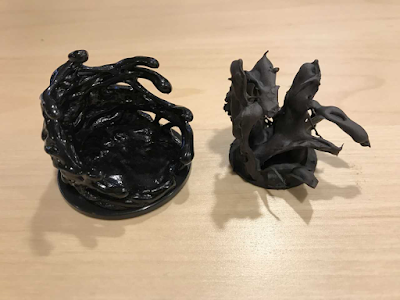 Got several of the civilians I planned to do finished yesterday, so I wanted to post about them.  I ended up not doing the bartender yet (I can't decide on his pose), but I did get two guards done (one of them sleeping!), a guard captain, a torch bearer for a party of adventurers, and a serving wench.  Here they are all lined up in a row. 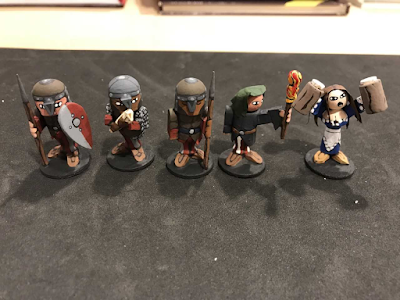 Here are the guards. The one without the shield has his eyes closed, he's the sleeping one.  The one in the chainmail and the metal helm is obviously the captain with his baton ready to club someone for misbehavior (or perhaps club the sleeping guard!).  Nothing new construction wise with them, or painting for that matter.  I kept their armor very simple and plain looking leather jerkin.  I'm starting to really like the striped pants of the Middle Ages for these figures for some reason as you can see. 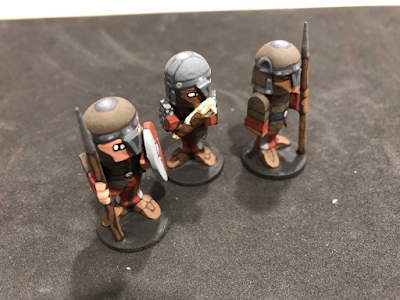 You can really see the simplicity of the paint jobs on these guys.  Can't have the city guard showing up the adventurers now can I? 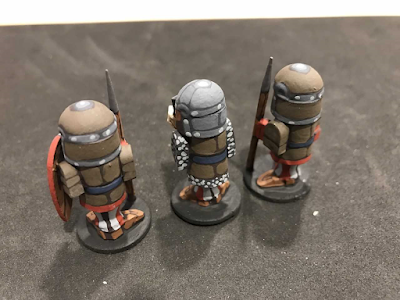 Next up are the torch bearer and the serving wench.  Nothing new on the torchbearer except for the torch.  Instead of DM Scotty's Q-tip torch construction, I actually used a toothpick cut down to size and then just used hot glue to make the "flame" part.  No smoke with this construction but I don't really miss it to be honest.  The serving wench is holding two pints ("They come in pints!?") of ale ... okay, these are more like gallons but you know what I mean ... that are made from tubular shaped wooden beads.  I glued a split down and trimmed down tile spacer end to the top of each to make the "foam" of the ale.  Other than that she's a pretty standard construction. 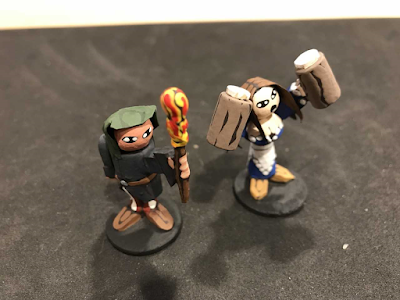 And from the rear. 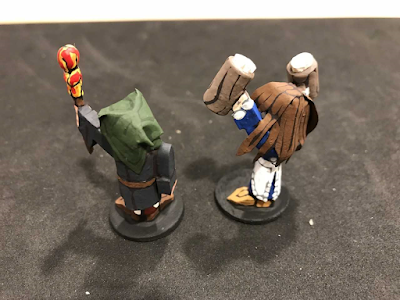 Pretty happy with these figures, especially the serving wench.  Might be nice to do a tavern full of NPCs ... when I actually get some free time.﻿
﻿
﻿
﻿
﻿

I'm pretty excited, I might get to have my figures used in a game at the North Texas Role-playing Games CON in June.  It's primarily an OSR convention and I think the figures will fit in nicely.  Thom, over at Throwigames, has voiced an interest in using my little fellows for one of his convention games.  So I've been hard at work making more adventurers.


I had a distinct lack of elves, so I decided to do another female elf adventurer, and I have no male elven adventures so I did the first.  In B/X D&D, the game he is running, "elf" is a class and they are all essentially Fighter/Magic-users, so they wear armor.  While I was doing them I decided to do another male human Fighter (can't have too many of them), another female Thief (I wanted to try a different leather armor look), and a "traditional" (read "stereotypical") human Magic-user.  For all of the female figures, I was also testing out a different way to do helmeted female heads.  Here are all the figures in a row. 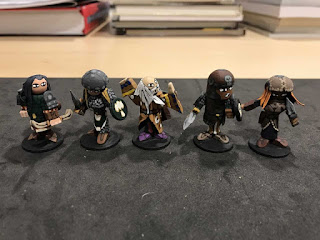 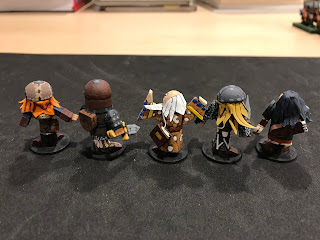 I added a pack to the human fighter's back, and the magic-user has a spell book on his hip.  Both are made from tile spacers.


Close up of the elves. 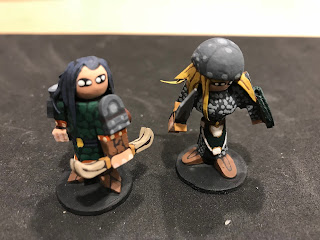 Nothing really new construction wise on the male elf.  The female elf, however, has a new head.  It's a small bead split in half for the face (flat side on the top) and the helmet is a large bead split in half (flat side obviously facing down).  I thought this would a) look great, but also b) give me some room to do some really fun hair.  I was right!  I like creating movement in my figures using the hair and both this one and the female human thief have great hair.


Speaking of the humans ... close up time. 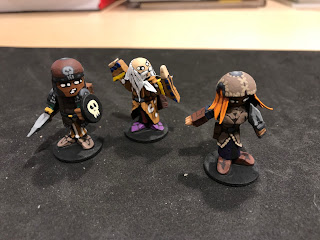 I never get tired of making the human male fighters.  I just love that construction.  I wanted him to be a bit more menacing so I painted a skull on his shield and on the front of his helmet.  The magic user is the first "oldster" I've done with the balding pate and the long flowing beard.  I  like the way he turned out too.  The next one I do I'm going to have holding a scroll I think.  The female human thief on the far right has the same head and helmet and hair construction as the female elf.  I wanted to give her some more "primitive" looking leather armor and I'm happy with the paint job result for that.  I also like her pose ... sort of holding her hand out cautiously signaling for those behind her to stop because she has detected some sort of danger ahead.


My next batch are some civilians.  I'm doing a bartender and serving girl, a torch bearer, and three city guards who can also stand in for any generic jail guards or whatever, even in a dungeon environment.
Posted by GrayMouser65 at 4:51 PM 2 comments: