Generally speaking, I stay away from Hot Glue and Hot Glue Guns. I inevitably burn my fingertips by smooshing it into the molten glue at some point. More importantly, I end up covered in thin glue threads. (If you have used hot glue, you know exactly what I am talking about.) All that said, hot glue does have its uses.

First off, it sets very quickly. It is not unreasonable to expect it to be fixed in place within 30 seconds. It also has a pretty good grip, and parts that do not take shearing stress will stay stuck. It is also fairly water-resistant, unlike white glue. If you ever do need to remove something glued with hot glue, however, an X-Acto knife will go through it quite easily.

Hot glue also has one other interesting property: it can easily and quickly create or modify shapes. Need a nose added to a sphere? A dot of hot glue will do, plus it can be roughly shaped about 15 seconds after application (note the 'burnt fingertips' statement at the start, however) and can be carefully carved with an X-Acto knife after it has set. Do not use a rotary sander, like a Dremel, unless you absolutely want to throw away that sanding drum, however. Hot glue will gum up sandpaper, sanding blocks, and sanding drums in a heartbeat.

When I went to Cold Wars 2012 it was to participate in Matt Kirkhart's and John Acar's recreation of the Battle of Zama using Matt's rules Arrayed for Battle! and Matt's and John's 25mm ancients craftee armies, shown below. 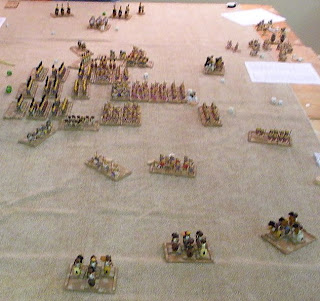 Seeing their armies online inspired me to create my own army, for DBA, in the same scale and style. 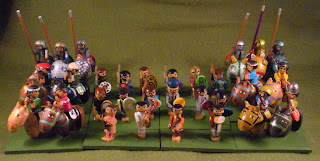 Note that these figures are 25mm, whereas most of my other figures are 40mm, as they are based off of the wooden "Boy" game piece. I started thinking about building a companion Seleucid DBA army for the Early Armenian army pictured above, so I went to the workbench and looked at the wooden shapes that I have on hand and started experimenting.


Note that the above pictures are not to scale.

The button-and-spool build is pretty standard. In fact, John Acar was a guest blogger here and showed us how he made his figures for Zama, and he used those same shapes. I like the look of the figure, but what I was trying to avoid was cutting out all of those arms (usually from plastic tile spacers).

The first step I took was to hot glue the plug to the spool to make the basic body. From there I used hot glue to attach the toothpick to the spool, where the butt end would not touch the 'ground', and about where a person might grip a pike. I used a little extra hot glue to make the shape of a right arm and hand.


The glue is not very easy to see, so here is the painted model. From the right side and rear you can see the hot glue used to create the shape of the hands and right arm.


Two other views, allowing you to see the left hand and arm.


As you can see in the last picture, I am continuing with my new style for painting faces. By using a darker flesh color you can give the impression of 'five 'o'clock shadow' beards rather well. Something I have not really been able to achieve before. Maybe a painting tutorial on that, if there is any interest.

The shield design is a shield transfer scanned, shrunk down, and printed onto paper, then glued onto the wooden shield. (I did not do the scanning, however, as I found the design on the Hät website.)

All in all I think the figure looks pretty good. The figure also takes significantly less time to make and paint than the 40mm figures I normally do. Time to think about starting the entire army…
Posted by Dale at 1:46 PM No comments:

First, let me start by welcoming new reader jimduncan779. I hope you enjoy the articles. Know that posting comments is welcome, as is suggesting future topics.

I posted on the Wargaming on a Budget forum on Yahoo a link to a tutorial (scroll down) where a guy was making alien trees for his science fiction games with wooden shaker pegs and hot glue. I decided to give it a try, but with a little twist. I did not want to use the plastic flora from Michael's, but rather to use some wooden shapes that you can also buy cheaply from Michael's, called Woodsies 330ct Teardrops, Ovals, and Circles Pack by Loew-Cornell.


Let me apologize in advance for any blurriness in the photos. My workshop/man cave is unheated at the moment and we are hitting below freezing weather here in Arizona. I guess my shivering was causing more of a problem than I suspected! 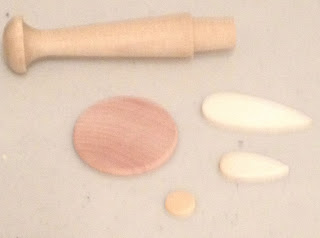 Generally the pack comes with three sizes of teardrop, ovals, and circles. I started by hot gluing a ring of medium-sized teardrops to the top of shaker peg. 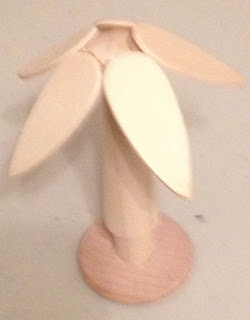 After that I used a series of small teardrops, ovals, and circles to cover the gaps on the top. I added a second layer of medium teardrops under the first to flesh out the foliage. 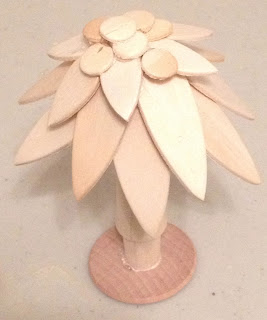 Once everything is in place, I squirt a lot of hot glue into the underside of the model to bind everything together and give the whole model strength. 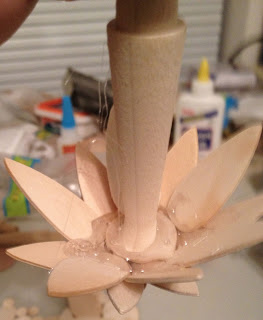 As for cost, the greatest expense is the shaker peg in the center. I bought a two-pack for $2.00 off of the shelf of Lowes (a DIY hardware store, for those from other countries), which is hardly the cheap route. You can get them as cheaply as $0.16 in bulk (500; $0.20 each for 100) from craft parts wholesalers on the web. If you plan on making a lot in one go, this could be pretty cheap. More to the point (for me), is that it has that "craftee" look that goes so well with my soldiers. 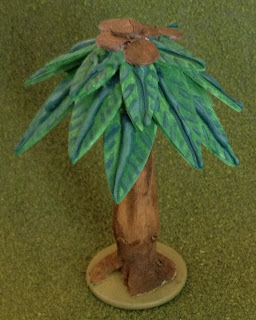 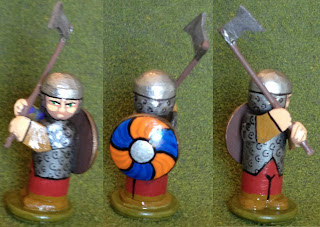 I started painting my huscarls for some 40mm wooden gaming of Saga. Some of you may have seen my previous Dark Ages Warlord, who is now no longer a Anglo-Danish Warlord (who must have a two-handed axe), but a Welsh Warlord. (I added a javelin to the left hand in order for him to qualify for that role. It was easier than working a two-handed axe into the figure.)

You can click any image for a larger version.

For my first huscarl I wanted to try a "spinning wheel" style with the shield. I have been seeing more and more 28mm painters use a two- and three-color scheme for a single "color" on their shields. A number use a "banded" style of painting, but my am not sure what it is supposed to represent. Painted leather stretched over a wood planked shield with the dark spots representing the low spots between wood planks? In any case, I like the spiral effect this gives. I may try it more. (I have five more huscarls to go for this army.) 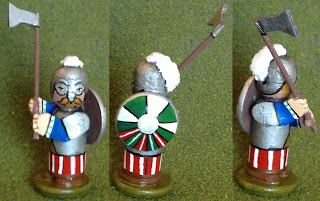 Next up is the Warlord, and with the requisite two-handed axe, qualifies as an Anglo-Danish one. I gave him stripey pants and a plume on his helmet to signify his status better. Still no cloak though.

I am not really happy with how his shield turned out; the design just fell flat. The great thing about mounting figures singly, however, is to ability to go back and re-paint or touch up figures between gaming sessions. So I will leave him as he is, so I can get him on the field faster. But someday I am going to figure out how to fix that shield without simply re-painting it entirely. 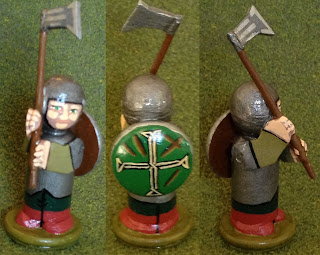 My next huscarl is sporting fancy red boots and silvering on the axe. The shield's cross is hand-painted. I was going for slashes on the shield, but in the end I think it detracts from the cross. Oh well. 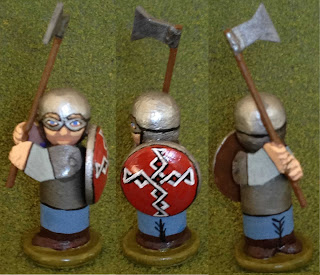 This huscarl has a lot of time in on the shield design. I hand-painted all of that criss-crossing for fun (it really was!) and I think it turned out pretty well. Note that I did not slash up the shield!

I put wrinkles in the pants along the line, front and back, separating the left and right legs. I think it looks okay, so I may do it more. Compare it with the figures above where I did not do it.

Someone once said that what really makes these figures unique are the faces. I could not agree more.

The Warlord's face (far left) is painted a little more traditionally, with full flesh colors and painting the darker recesses. I did not realize at the time of painting that the black line makes it look like the Warlord lost one of his front teeth, but I like it!

The remaining three figures are painted in a new style. I painted a darker flesh color (more of a bronzed look), then the eyes and hair, and finally painted "spots" of lighter color for the nose, brow, cheeks, lips, and chin. I think it turned out pretty interesting.
Posted by Dale at 2:41 PM No comments: