I found some pictures of the building process.

First, start with the standard pawn. To make them horse riders, their bodies will be shorter, as the legs will be painted onto the side of the horse, so you only need a pawn from about the hips up. So, take your mitre saw and shorten the pawns. (Save the pieces cut off.)

The pawn all the way to the left is the original. I cut both the tops and the bottoms off. The top cut makes putting the shakos on a bit easier. As you can see, I did not worry about making the height og each pawn exactly the same.

See my previous tutorial on making shakos, but note that because I have flattened to top of the pawn's head, I don't need to "scoop out" the inside of the shako to make it fit; it can also be a flat cut. Makes putting the two together much easier. Also, I filled the hole with a 1/4" flat head button plug. This saves me from having to use the Crayola modeling material. 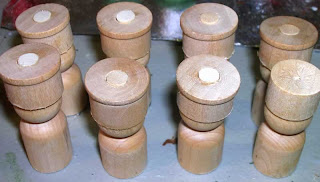 We'll set aside the pawns for awhile (as I've run out of pictures), but you can pretty much just follow the previous shako tutorial. I used the same materials and techniques to add the peak, plume, etc.

Now let's look at the horse. At its core it is simply one spool for the body and to split eggs for the fore and back legs. 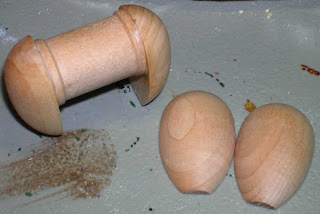 Note that I have flattened the bottom of the split eggs so that the model can stand on its own. Also this increases the surface contact area for gluing to the base.

To add a head to the horse, simply glue on another split egg. I flatten a spot on the split egg for the fore legs so increase the contact surface area, which helps create a strong glue bond. Then glue the fore and back leg pieces to a 1 1/2" disk to act as a stand. 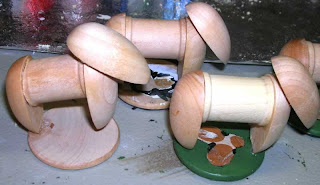 Note that in my scale (42mm), this makes the infantry on 1" stands and cavalry on 1 1/2" stands. Keep this in mind for any rules you may write to use figures of this size. 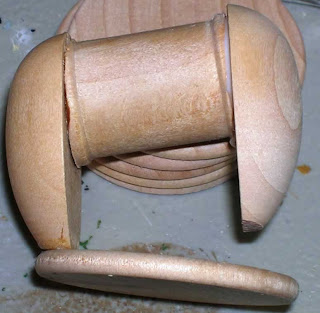 As I find more pictures I will post them. (Even though I am already violating my vow to put Wooden Warriors on the "back burner"!)
Posted by Dale at 8:49 PM No comments:

I recently bought some shield transfers (decals) made by Little Big Men Studios for my 15mm Xyston Carthaginians and Macedonians (they are beautiful, by the way) and I noticed that the back of the transfer sheet indicated that they were using stock decal transfer paper for inkjets. That got me to thinking.

What I liked about printing on paper and gluing to wooden pawns was that I could get good detail quickly. What I did not like was the color of large surface areas. Unless you are printing to very high quality stock, and using the best inks and highest resolutions, the color often looks washed out. In my experiments I ended up painting the coat color onto the paper (also due to color matching problems) to solve the wash out.

If I could combine painting the base colors on the wood with printing out the detail, while also keeping the precision cutting of the decals down to a minimum, I might have the "perfect" solution. What if I used clear decals? I've got to go to the office supply store and give it a try.

Latest news on the PC: I bought the wrong power supply so I have to send the one I bought back and get a new one with the right power connectors. Grrrrr!
Posted by Dale at 5:44 PM No comments:

I haven't been blogging of late for a few reasons.
So, once I get the computer back up, I will try and post a little here and there about Solo DBA, DBA games in general, AWI, and such. I am trying to get organized with the local club and get some regular gaming going. Hopefully we will start a Wednesday Night DBA Fights soon.

As for Wooden Warriors. Well, I have some pictures to process - experiments with paper and Napoleonic cavalry - so that will make it here. I am also bugging Justo (but obviously not effectively enough) to do a guest blog entry on making ships in the Age of Sail. There is also a new member (Steve C.) on the Wargaming on a Budget forum that is doing some nice 42mm work (my scale!) and maybe I can convince him to do a guest blog entry or tutorial. Finally, Jim has done some nice paper/wood work that he can get some time to also do a blog entry.

I obviously am not making my November goal to have enough Napoleonic troops done in time for the release of Command & Colors: Napoleonics by Richard Borg and GMT Games. Maybe once I get a troop list from the scenarios I can get proper motivation. (Yeah, that's it!)
Posted by Dale at 5:52 PM No comments: