Got my last unit of Breton infantry finished today, which means that I have the entire Brenton Allied Command for my Battle of Hastings game finished.  Here is the unit I just finished by itself.  Nothing new construction wise, although I have started to just hot glue the figures to the bases now instead of screwing them in from the bottom.  Not as strong as the screws, but clearly strong enough and it takes a) way less time to hot glue them on, and b) it is SOOOOO much easier on my hands.  Screwing the figures to the base, even with a power drill, was really tough.  Anyway, here they are. 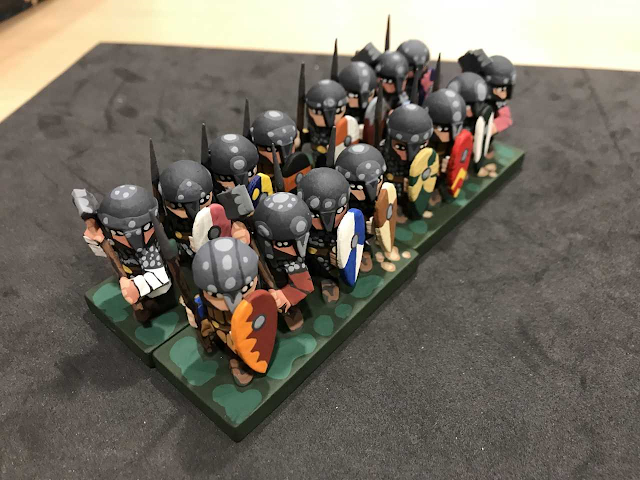 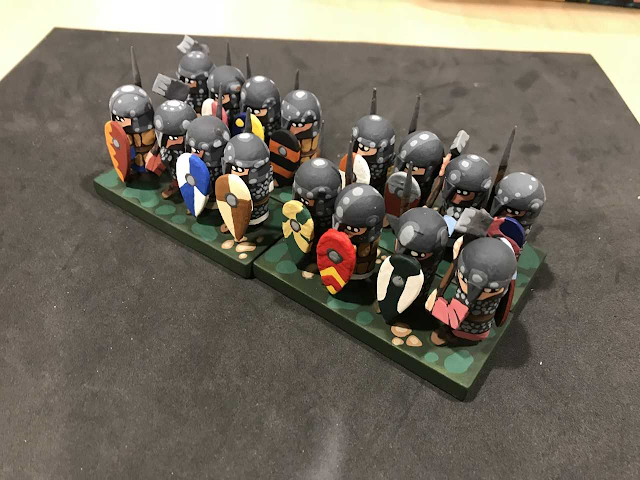 I did remember to paint the tunics sticking out below the bottom hem of the chainmail or padded armor this time (I forgot to do that on the Huscarls unit I finished earlier this month!).  I didn't go with the angled shield arms for these, I went vertical with them, that is except for the axe-wielding guys, their front arms are obviously glued to the body at an angle.  Not as cool looking as the angled shields, but easier to do.  I might try and do a mix and match unit with some straight up and down arms and others angled on the same base.  It gets tricky when you do stuff like that, though, because you don't really know how the shields are going to go in terms of spacing until you actually glue them on, which is the last thing I do with these figures.


I decided to set up the Breton Allied Command in its entirety on my new battle mat.  It's one of those neopryne (I'm sure I'm spelling that wrong) battle mats which is essentially a thin mouse pad that is 6 feet by 4 feet (the one I bought has those dimensions, you can get other shapes as well) with a scenic top part printed on the giant mousepad.  I wasn't sure how my guys were going to look on it, it's pretty realistic looking, but I think it looks okay.  I planned to use this battle mat for the actual game.  Here are some shots. 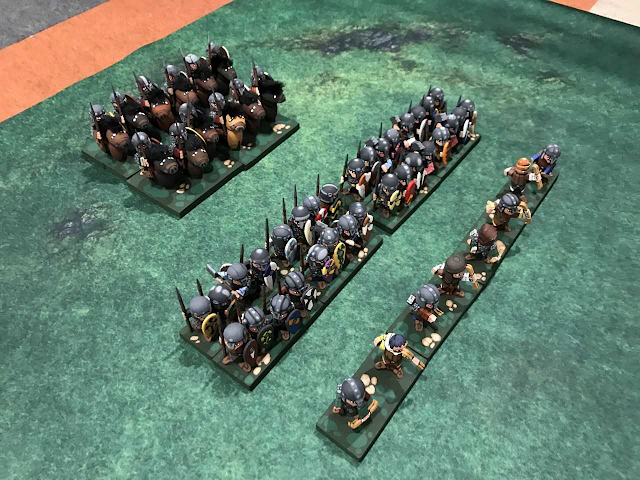 Archers in front, infantry behind, and cavalry ready to ride out when needed in the rear. 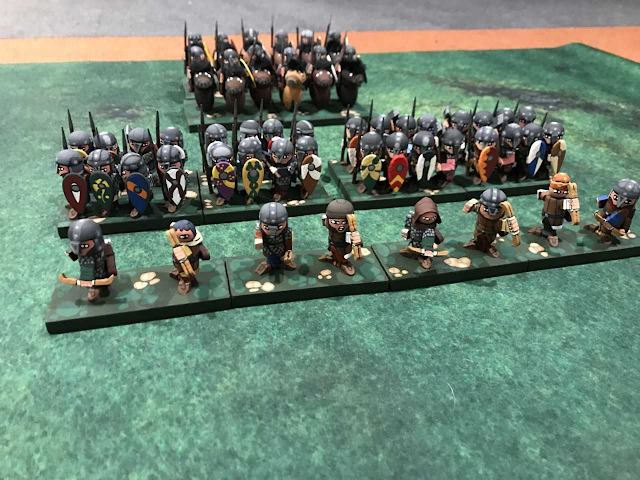 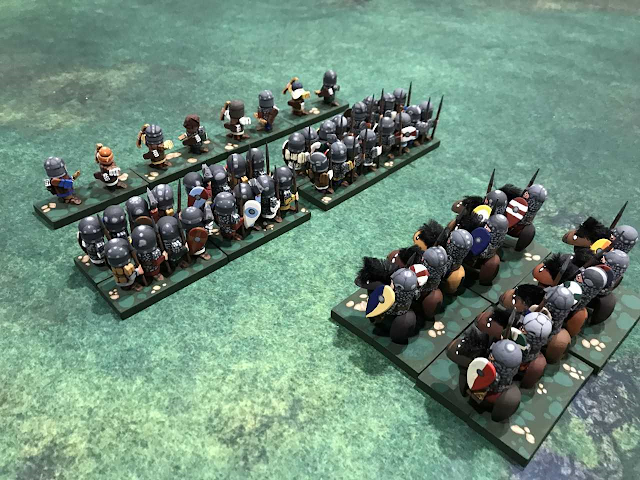 View from the rear.


The next unit I'm working on is another Saxon Fyrd unit, and when I get that one done I'll have the Saxon's right side of their line finished (the one that opposes the Brenton allies).  So, when I get that done, I'll post a picture of this entire side of the battlefield with the Saxons facing off against this Brenton allied command.
Posted by GrayMouser65 at 3:44 PM 2 comments:

Real life has been incredibly busy this fall so I haven't been able to get as much hobby time as I would have liked, but I finally got my first unit of Saxon Huscarls done for my Hastings game.  Here are some of my standard shots of them. 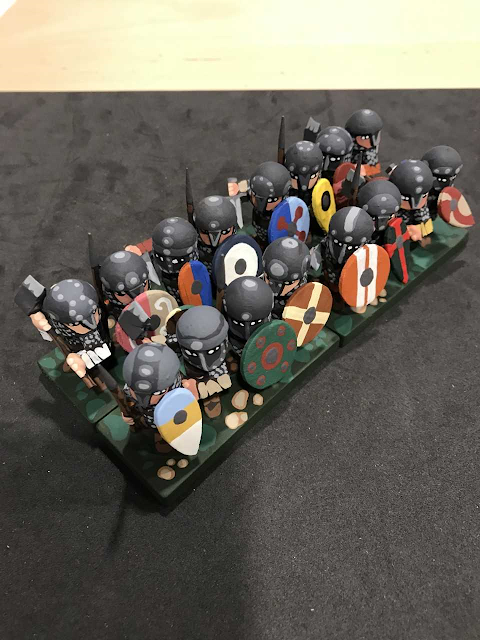 They are very similar construction wise to the previous Dark Ages infantry I've been doing but there are some differences.  First, I wanted to put some face masks on some of them to help me tell the difference between them and, say, the Norman allies.  I may also go back and paint some facial hair on them too, but I'm not sure I'm going to do that.  I also put a mixture of round and kite shields in the unit, which also makes it easier to tell them apart from the Norman side (I use only the kite shields for them).  I also gave them a greater mix of weapons with spears, swords, and two-handed Dane axes. 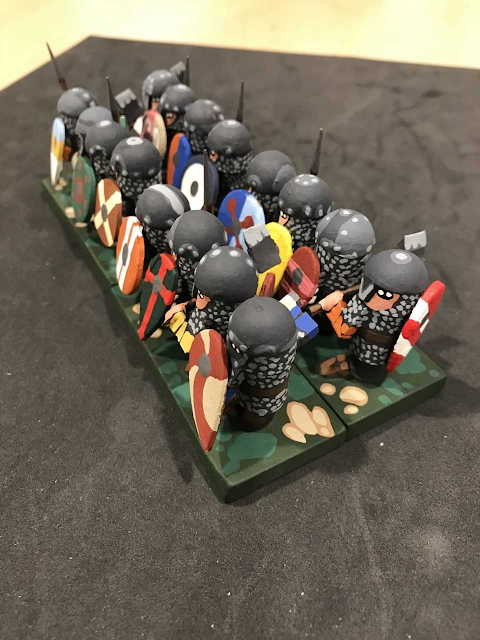 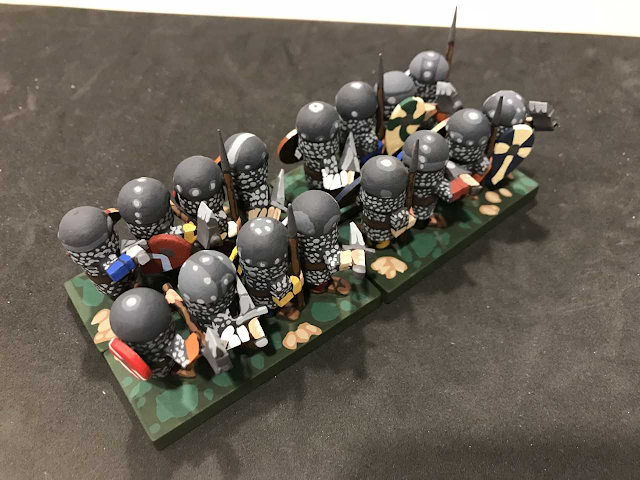 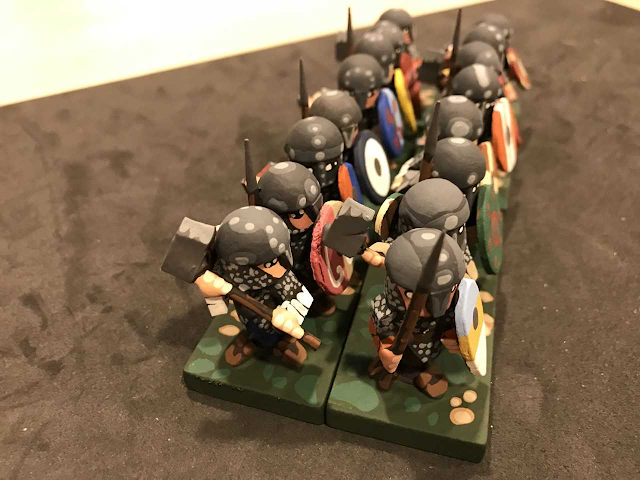 The face shields were easy, I just fashioned them out of paper and glued them onto the head.  The top part of the shield was a straight edge so that it would lay flush against the bottom of the helmet piece, and I creased the center so that it would have some 3D effect that is consistent with the way they were constructed, at least as far as I can tell from the pictures I looked at.


I also angled the shield arms a bit away from the body so that it looks like they are holding their shields out to accept a charge, the bottom part of the shield sticking out further than the top part.  It also keeps the shields from being perfectly parallel with the body, which is not very natural in terms of how people really hold a shield, at least for any length of time.


I like how they turned out, they are "regular" enough in their appearance to denote skill and training which of course would be a part of a more elite Huscarl unit, and "chaotic" enough in their weapon choices, shield types, and arm positions to convey their ferocity when in actual combat.


Now onto another Norman allies unit and one more Fyrd and I will have one entire wing for both sides finished!
Posted by GrayMouser65 at 11:41 AM 4 comments: