The more I looked at him, the less I liked his face.  I moved away from my style of painting to trying to make him look like the cave troll in the movie.  Big mistake.  First, he looked surprised not scary.  Not good.  Second, he is supposed to be looking down to his left like he is reaching out to pick up someone.  His eyes were put too far up on his head.  He did not look like he was looking down at all.

So I painted over the face, and redid it in my style, further down on the split ball to make him look like he is looking down and to his left. 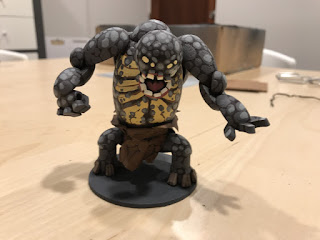 Much better.  Scary and looking like he is reaching out to grab an unlucky adventurer.
Posted by GrayMouser65 at 7:28 PM 16 comments:

Took me a little while, but I finally finished the cave troll.  All my friends are at Cold Wars so I have some time to work on my Balin's Tomb game project.  I actually started with another construction, but that one ended up being way too big, so I think it will eventually, if I decide to do the scenario, get turned into the balrog.  But for now, here is the cave troll. 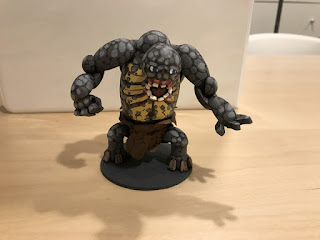 I decided to go all out with the construction.  Body is a larger sized egg.  Legs and arms are both split eggs (and a spool in the case of the lower legs) attached together overlapping somewhat to create bends, the length of the limbs, etc.  The fingers on both hands are tile spacers.  For his right hand, I used an oval bead that I built the fingers around so that later if I want to I can put a weapon or something else in his hand.  I was going to go with a chain, but the one I bought was too big to fit through the bead, and a smaller chain I think will look funny.  I could cut the chain and then use some thin wire to join it back together inside the bead, but that's a lot of fiddly work that I'm just not up to at the moment.  The head is a split ball (smallest size they make I think, I believe it is 1 inch in diameter) and his lower jaw is a small split egg.  His toe nails and teeth are also tile spacers cut and glued on.  His loin cloth is the now ubiquitous paper. 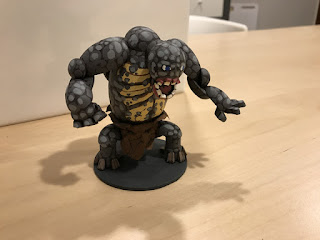 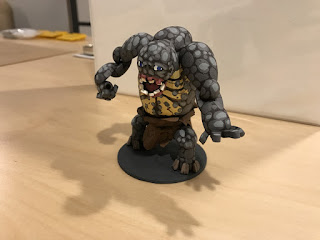 I just looked at images online to get the paint scheme.  Was pretty easy, and takes advantage of my style of blob-like painting for texture.  And now for the action shot to give you more of a sense of scale. 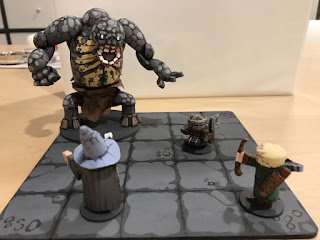 I think he turned out pretty well.  I would have linked up the split eggs a little differently in hind sight, now that I see how his arms turned out.  Perhaps I can take what I learned on him and if I end up doing the balrog, the balrog will look even better.

Here is the new cave troll next to the old one that I did at the same time as the old Lord of the Rings character figures I've already posted before. 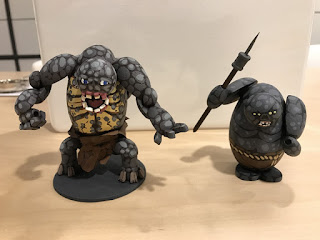 At the time, two or three years ago I thought my original cave troll was the cat's meow.  I've come a long way.

Now all that is left for the game is to do the terrain for Balin's Tomb.

The Fellowship is Finished!

Finally got all the Fellowship finished.  I was hoping to get Gandalf, the last member I needed to complete, finished earlier this week but I got side tracked painting goblins from the Escape from Goblin Town Hobbit box set from GW.  So I ended up finishing Gandalf this morning. 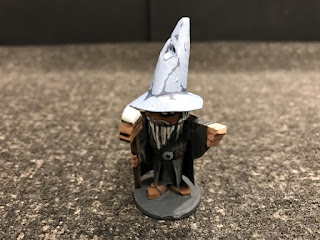 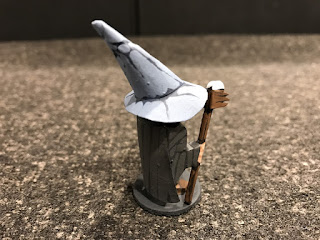 He is sort of tough to see in these pictures with his color scheme, but he ended up being a bit of a challenge.  I put his cloak on first, and then decided I wanted to do another layer of robes underneath, which meant retrofitting the long "skirt" that you can see in the first picture that is closer fitting but the same construction as I used on Boromir, Legolas, and Aragorn.  Ugh.  Huge mistake.  Should have put the skirt on first and then the cloak.  But it's on there, so it all worked out in the end.  The hat is also made of paper, and I thought it would be a really hard thing but it turned out not to be.  The brim is just an oval with a small pie shaped piece cut out of it so that when you then join up the to sides of the circle to close it, it forces the shape to be more of a bowl than just a flat circle.  The pointy part of the hat is essentially the same construction, just with more of a rectangular shaped piece rather than a circle.  Once I made the cone and glued it I cut the larger end at an angle so that it would sit correctly on his head (correctly = pitched backward like you can see in the second picture).  His staff is a tooth pick with a cut tile spacer glued on top.

Here is the entire Fellowship: 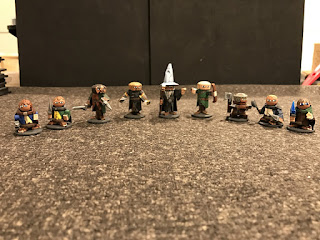 Hard to see them because there are nine, but you get the idea.

As I said in my last entry, I wanted to compare these new constructions to the Fellowship I did about 2 or 3 years ago.  The difference is quite striking I think.  My construction complexity, painting complexity, and general skill in building these figures has obviously increased over the years.  Check out the difference in the new and old (respectively) Gandalfs. 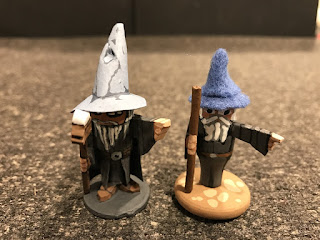 And everyone else for that matter ... 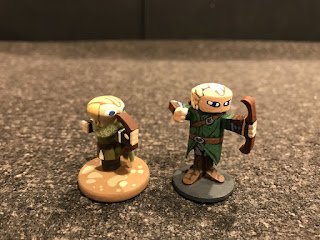 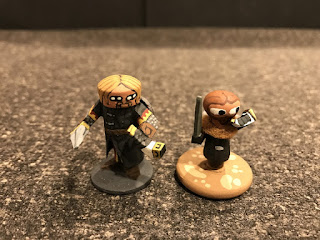 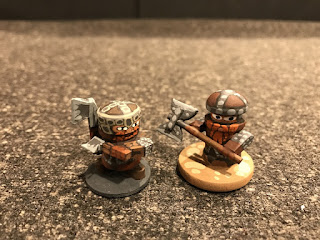 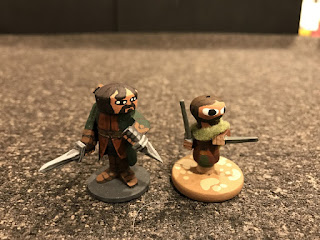 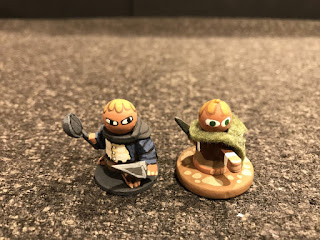 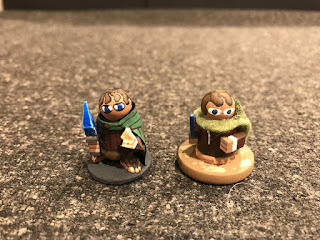 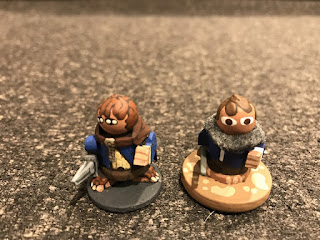 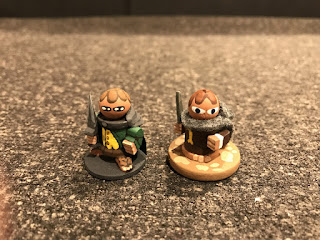 I think that over the years I've been inspired by Dale's more detailed figures, and seeing them opening up the possibilities for me to do more complex things with skirmish-based game figures that are only a little smaller than the ones he does.  For the humans and elf (except for Gandalf ... wait, is he really human?) I used the shaker peg for the old figures.  I still really like the piece, mainly because it makes everything one piece except for the arms, but I like the milk bottle look a lot better.  Also, being a bit bigger allows you to do more details in your painting.  I also used to love the felt cloaks and the felt Gandalf hat before I did the new ones out of paper.  Seeing how the paper can be painted to better match the overall look of the other aspects of the figure, making the figure look more contiguous, and the fact that the paper is actually more flexible and easier to shape than the felt, really has sold me on using paper.  The new figures are just so much better.  This makes me realize that I need to do a new cave troll for the Balin's Tomb game.

I hope you have enjoyed the last month and a half adventure into the Fellowship and the goblins of Moria.  I very much enjoyed "remaking" these figures and am overall very pleased with them.  I can't wait to put them on the table in a game!

Now, onto the Cave Troll and onto the terrain needed for these games in the mines of Moria!  Not sure when that will happen, but these two things are next on my Craftees project to-do list!