I was accused of teasing :) you all with my last entry, because I did not include a picture of the final product. That wasn't teasing; I wasn't finished. But, here he is in all his glory, with a tutorial on how he as made, to boot.


Okay, maybe not "printing one out", but if you have been following my ramblings of late you know I have been experimenting with printing out the uniform of a Napoleonic British Line infantryman and gluing it to my wooden warrior pawns, saying me the task of painting all that detail.

To start is the painting. This is just to fill the gaps that the paper does not cover. The shoulder area, because it is curved horizontally and vertically, will not be completely covered in paper, so paint it the same shade of red you are using in your print-out. Paint the shoes black, along with a small band in case the print-out does not cover all the way down the pawn's body.

At this point I should also have painted the face, so I don't risk slopping paint onto the print-out later.

Print out the uniform and carefully cut around the outside. I use small scissors designed for scrapbooking, such as Honey Bee. I also make cuts between the collar and the chest lace, almost to the center line. Further, I make cuts along the top of the strap that runs left-right over the cross belts, up to the chest lace. These cuts allow you to mold the paper around the neck and in the upper chest region. 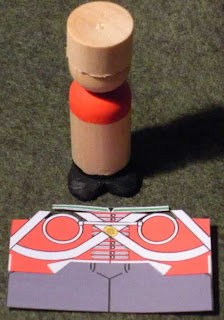 The next time I try a build I am going to paint one of the uniforms with matte varnish before I start gluing it, to see if it helps repel rubber cement stains and ink smearing.

The next step is to tack down the uniform to the pawn. I use a small glue application and paint a stripe of rubber cement to the pawn, then line up the uniform and press and hold until dry. 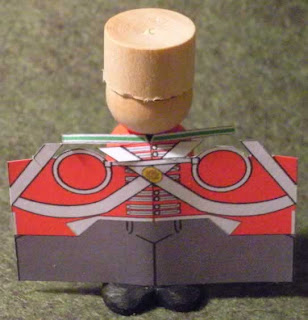 Next, carefully apply a thin amount of rubber cement to the collar and carefully wrap it around the neck. Using a rounded toothpick helps, but you don't want to pack it in the crack, but rather have it stand up. It takes practice, I suppose. (Left Figure)

Glue down the upper chest area, making sure the cross belt straps are folded under the pack straps. Make sure the area is glued firm before moving on. If you are doing a series of them in assembly, usually the time it takes to get through them all is enough for you to keep right on moving. (Right Figure) 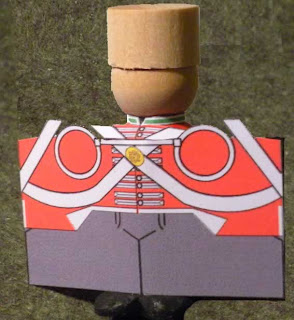 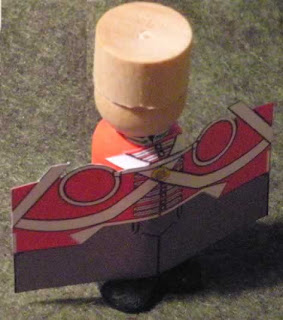 Now glue the pack straps onto the shoulder area, along with the rear cross belts. Glue the sides firmly to the pawn and hold it until the glue sets (a few seconds, with the heat of your fingers). (Left Figure)

Finally, glue the back of the figure. Look at the figure and make a few snips with the scissors to try and remove any wrinkles in the shoulder area. (Right Figure) 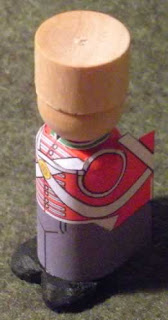 As you can see, we have the basic uniform and the gaps showing in the previous experiments are covered up by painting the red and black in the first step. Don't worry about the straps not matching up yet.

Now it is time to work on the Belgic shako. See my previous tutorials about making shakos but note that I don't use a spool for this figure as it does not have the prominent leather band that the French shako has. In this case I used a simple dowel the same diameter as the head. Add a peak, just as you would with a French shako.

The frontispiece is what makes the Belgic shako so interesting. It is reminiscent of the plates on Seven Years War Prussian fusilier mitre caps. Simply cut out and glue this piece to the front of the shako, carefully aligning it. (Left Figure)

Because this piece can be so easily damaged, I applied white glue to the back of the cut-out to stiffen it up. Later, I will apply a matte varnish to the front, which also helps stiffen the piece. (Right Figure) 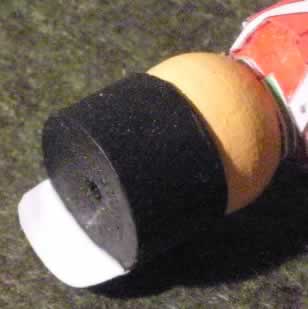 While the glue is drying I started work on the backpack. I started with a thick piece of balsa wood and sanded a curve into one side. (Left Figure)

Paint the pack black (unless historically it had a different color, which was true for some units in the Peninsular, from the pictures I have seen) and then coat the pack with Future (Klear) floor wax to harden the wood. Glue the curved side to the figure. (Ah! So that's why you sanded a curve...) (Center Figure)

With the backpack on, cut a small length of dowel and paint it grey for the bedroll/great coat (I am never sure which it is). I have also used a small piece of craft stick and made a cartridge box, painted it black, and glued it to the figure's hip. (Right Figure) This figure has lost his canteen, which would be on the left hip and would have a thin brown strap over the right shoulder (that I forgot to add to the drawing...). 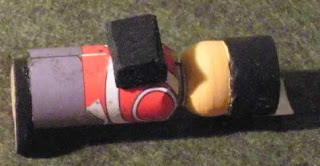 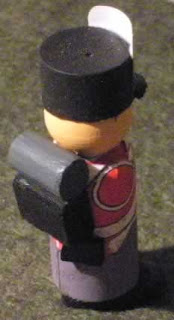 Wow, this little guy is starting to shape up. Next up are the arms. The drawing has two cuffs with lace. In this version I only made the cuffs long enough to glue to the fronts and sides. (Left Figure)

But, when an arm extends forward of the figure you will see that the underside of the cuff is not colored, so I had to paint it. I only painted the left arm's cuff and the right arm doesn't have the underside exposed. (Right Figure) 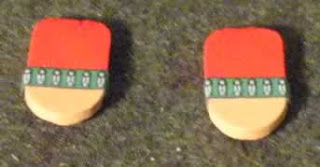 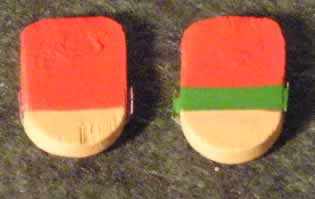 Glue the right arm onto the pawn, centering it into the ring made by the pack straps. (Left Figure). Do the same with the left arm. (Right Figure) 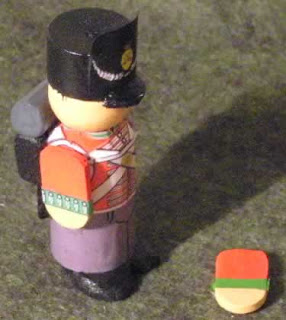 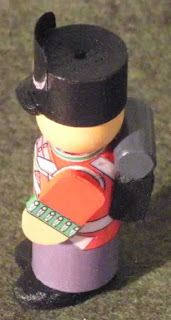 Now it is time to glue on the shoulder straps. I printed them a little long, so I snipped the excess after I had glued the strap to the arm, then painted over the edge of the arm with white to represent the tuft on the shoulder. 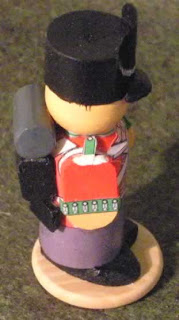 This next shows the other shoulder strap glued on, plus I start to add some detail to the back pack and bed roll by adding white straps and brass buckles. If I knew what the emblem on the back pack for the 69th was, I would have drawn that, printed it up, and glued it on. As it is, I can always add that later if I find out what it is. (Comments on sources welcome.)

So, there you have it for the basics. I added things that I have gone over in previous tutorials, such as shako plumes and making muskets. I decided to use a simplified face design. (Hell, they all look like South Park's Cartman.) Here is the final figure in all its glory. 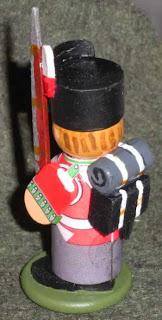 For the level of detail this figure requires, it was built and "painted" in a very short period of time. From an experimenter's point of view, it is a success.
Posted by Dale at 5:56 PM No comments:

I have been working, bit-by-bit, on refining my experiment with printing on paper and then gluing the results to the wooden pawns. I have to admit that I like the look of painted figures better, but I experiment for the fun of it and in the hopes that I will surprise myself.

I think these results surprised me a bit.

My first experiment did not go as well as I hoped. More painting than expected and more fiddly than I wanted (or for the result I achieved). My second experiment was more in line with what I was thinking. In fact, that is the model I have been building from. Compare the images in the second experiment with that below and you can see how much work I've added. 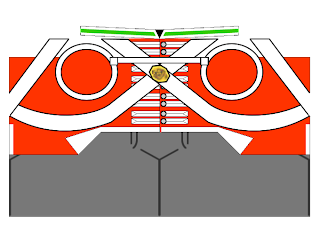 As you can see, I've added the cross-belts and pack straps. I've also emphasized some details, like the creases in the trousers, and made some changes to deal with curves, such as curving the collar upward. The figures below show simply gluing the cut-out to to the pawn, with no color beneath (it would be red on the shoulders). Here is the figure from the front. 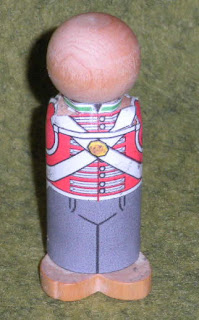 The chest lace shows up nicely, as do the buttons. The collar is even discernable; more so than if I painted it. Here is the side shot. 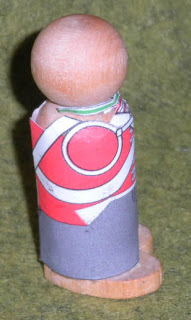 Here you can see the cross-belts start to come together. I thought of printing the shoulder strap on, but it really should overlap the arm, so it will have to be a separate printed and glued piece. Here is the rear shot. 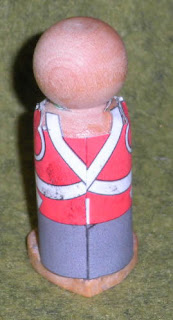 The seam is not perfect, but as I will put backpacks, bed rolls, cartridge boxes, and possibly canteens on here, the seam will be covered. (Note I used rubber cement to tack the paper down and a got a little on the paper, making it look dirty. I did not notice before I took the picture.)

When I put on the Belgic shako, I'll simply add a round dowel to the top of the head and glue the following on as the frontispiece. 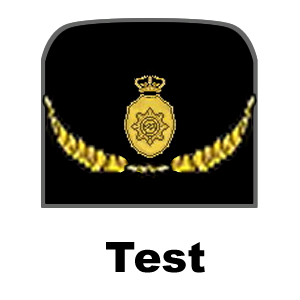 All in all I have to say it looked nicer than I expected. And given the level of detail, even the fiddly cutting part is far faster than painting it all by hand.

So, would I do all of the figures this way? No, I don't think so, as I like the colors from painting. The printing still looks washed out. But, this is a way to get an army up and done quickly, so that you have the leisure to paint up the troops, but it won't stop you from gaming. (Which, for me, gaming with the troops is the single greatest way to ensure that I don't lose steam on a painting project.) So, I will probably use this for a battalion or three of troops to get me started.
Posted by Dale at 11:39 PM No comments: