I've finished my 28mm armored Seleucid elephant for my friend's DBA army. However, in all this time of waiting for it, he went and bought a painted metal one since I started! I guess that is what I get for taking too long! I guess I will just have to build an army with an armored elephant! :^D

For the armor I decided to use a metal face mask, such as found on the cover of WRG's book Armies and Enemies of the Macedonian and Punic Wars. However, I did not like the big scale armor on that cover, so I went with discs of metal linked into chains hanging from a central chain. I may go back and add more linked discs over the top of the blue cloth so the sides are armored. 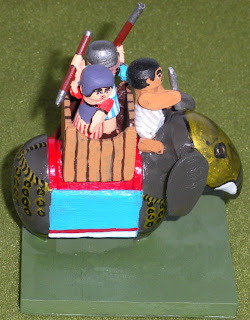 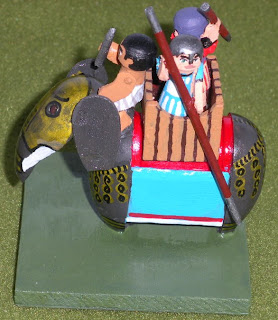 I definitely like the effect of the pikeman stabbing down. I am still considering adding light infantry to the base, both as an escort and as enemy. With DBA armies you tend not to see that, but with Impetus armies you sometimes do.

I've also added bands of armor around the legs and the end of the trunk, to give it a little more protection and make it a little more armored looking. In the picture below you can see the engraved expression I made for the elephant's mask, to make him look a little more fierce. The mottled look of the metal was actually a mistake – I aim for a clean, crisp look for my Wooden Warriors® – but I wanted the metal glossy so I applied some Future floor polish to it and it started to dissolve the ink (my new pen is clearly not waterproof or permanent). I actually like the look. 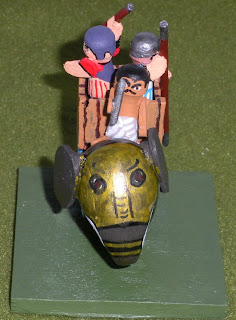 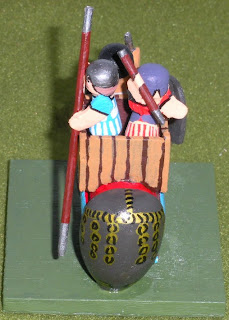 I am already thinking of a few improvements – case of javelins, shields on the howdah, silver tips on the tusks – but I will probably leave it like this for awhile. Time to finish more projects started.
Posted by Dale at 7:01 AM No comments: