It's been a while.  I've been distracted by work and 100 other gaming projects, primarily rules development.  However, I think I never posted anything about the sci-fi guys I've been working on and off on for a while now. Perhaps this is a redundant post, I apologize in advance if it is.

For almost two years I've been wanting to create a 28/32mm version of the old Ral Partha Final Frontier game.  I found a reasonably priced copy on ebay, purchased it, opened it up and had a touch of nostalgia as I rifled through the contents.  Years ago, when I was I think 14 years old, this game came out and I purchased it.  I had never seen a 15mm figure before, nor had I ever played what could loosely be considered a "wargame" before.  I was an old pro at D&D by this point, but Final Frontier was my first exposure to a wargame, albeit a skirmish wargame at best.  I also had the wonderful experience with this game of sending a rules question to the authors through snail mail.  It took about 2 months to get a reply, but they really did write me back and answered my question!

If you are not familiar with the game, the premise is very simple.  The humans of earth have developed space travel and are colonizing the rest of the galaxy.  They come across an intelligent race of aliens who oppose them.  There are three scenarios in the rulebook that add complexity and types of troops to the game as you play through them, sort of like a much simpler version of Squad Leader if you have ever played that classic game.  The point is, though, that you play the game with 15mm miniatures and cardboard counters to represent terrain, cities, stun and wound condition markers, missiles, etc.  What I wanted to do was make a homemade Craftee version of the game.  Progress has been slow, and I got distracted (more on that later), but I am pretty pleased with the core "human space marine" figure construction.  But you be the judge. 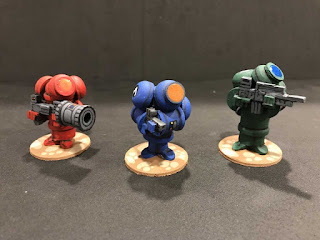 In the center is the standard "private" or trooper armed with a hand weapon.  On the left is a missile launching infantryman, and on the right is a heavy blaster infantryman. 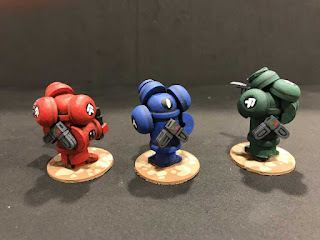 Even though it is not necessary, to break up the smooth, uninteresting part of the back of the figure (the larger spool in other words) I put a tile spacer "jump" or "flight" piece of hardware.  In the actual Final Frontier game, it would have no effect on play at all.  If you were using these figures for some other game, well ... that's up to you. 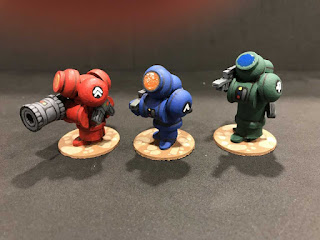 I made the heavy weapons guys higher in rank (hence their different insignia on their shoulder armor).  All of them are constructed the same way.  I believe it is a 1.5" spool for the main body, small tapered plug for the legs (actually one size larger for the heavy weapons guys, I felt like they would need more leg support/strength so that they didn't get moved around when firing their heavier weapons), tile spacer feet just like my fantasy figures.  The arms are a combination of a axle cap for the shoulder and a split 1/2" spool for the forearms  On top of the spool I also put a axle cap and an axle cap serves as the helmet as well.  The face plate of the helmet is just a thin precut plywood circle.  In addition to the back "jump" piece, the weapons are just tile spacers cut into a shape I liked.  The end of the missile launcher is obviously a 1/2" spool as well.  Painting was very simple as you can see.  I used bright paint for the buttons and lights on the equipment as well as the face plate.  Then I took a gloss clear paint and painted the face plates again to give them a shine.

As is usual, I got a little distracted midway through and decided to make a Skinny from the world of Starship Troopers (who I think these humans would be fine for as well!).  I always liked the Skinnies in the book more than the bugs, and I decided to go to the Star Frontiers miniatures game for inspiration.  I used the sketches in those rule books to make my own version. 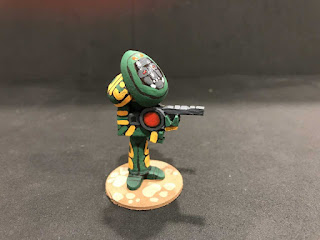 He is pretty much the same, I just used a 1 1/8" shaker peg for his body and a split egg for his head.  His arms are also all tile spacer, except for the should pads which are axle caps. 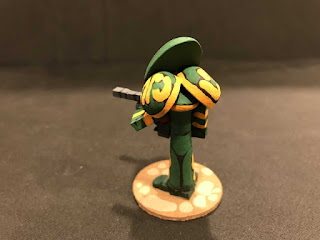 I think he turned out pretty good too!  The toughest part of these figures without question is making the guns.  But it was really fun to just let myself go and create whatever crazy looking firearm I wanted to.