Okay, the title is a little misleading.  These two guys could be in most pulp games, but honestly I'm doing them for different reasons.

The first is a Cthulhu Adventurer that looks a lot like a particularly famous archeologist.  I have a gaming buddy who wants me to take a stab at making some classic Cthulhu investigators (adventurer, priest, professor, journalist, etc.) and this guy was my first attempt just because he is so iconic looking I thought he would be the easiest to start with. 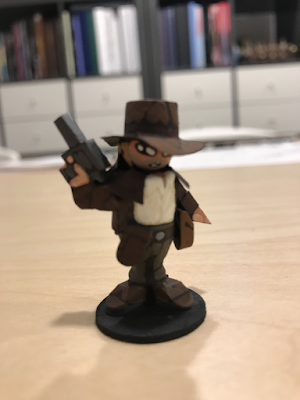 His construction is a little new and a little old.  The body is an upside down wooden craft milk bottle (7/8" tall) with the normal tile spacer feet that I always use.  His head is a 3/8" bead I split in half.  I made the head/hat grouping by gluing the flat side of the bead to a piece of paper, and then glued a 3/8" tapered plug, larger side down, on the paper on the opposite side of the bead.  After it dried it was easy to cut the paper to make the proper brim shape for the head and then just shape it with my fingers.  Arms are also tile spacers as is the gun, holster (on his right hip) and satchel (on his left hip). 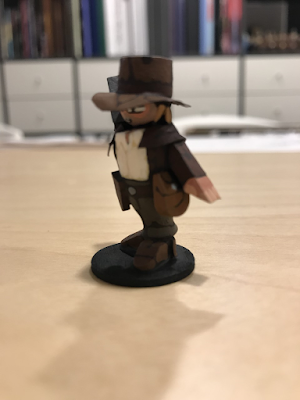 His jacket is paper.  I put strips down the front to his waist and then put a larger piece on his back.  After it dried I cut a semi-circle and cut it to fit to make the collar of the jacket. 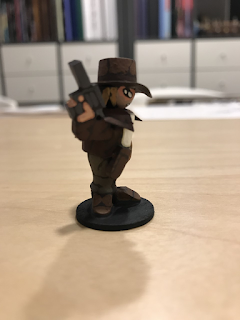 One thing I may try and do in the future is to sand down the top of the milk bottle in front of his head to make more of the right "chest tapered shape," but I might be getting a little too crazy.  Probably best to leave it as is.

The next guy is going to probably be a superhero in the new minis game I'm working on for low-powered supers like Batman, Daredevil, Hawkeye, Black Widow, most of the characters in the Watchman, etc.  I call this guy "Grenadier" and his big thing is he is a hand-to-hand combat expert and he has all these different gadget grenades (smoke, flash, tear gas, explosion, goo entanglement, etc.).  He also wears some light body armor and a gas mask to protect him from his own grenades.  I modelled the outfit after a WWI French Grenadier.  At the same time, this guy would be just as at home in a pulp game as an ally or enemy of the archaeologist above. 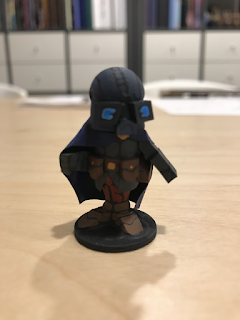 He sort of shows how different looking of a figure you can get using add-ons like belt pouches and goggles and gas mask.  He really is nothing different construction wise than the Dark Ages guys I've been doing except for the two pieces of tile spacers that make his goggles, the one that makes his breathing apparatus just below the goggles, and the various pouches he has on his belt.  His cloak and hood are just paper.  In every other way, he's just like a Dark Ages guy I've made before. 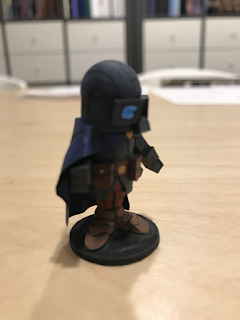 I like the red pants (early WWI French) and the gray light body armor.  His helmet is a dark blue and his cloak is a brighter blue similar to the color used by the French early in WWI. 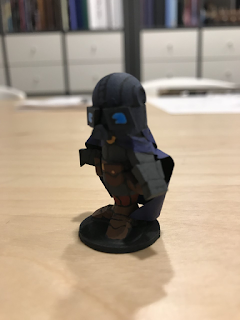 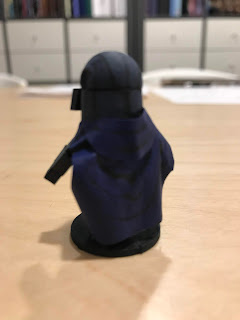 I've got a few more of these on my construction table right now and I'll try to show the pieces separate from the figure as I'm building them so that you get a better sense for how the figures are constructed.