Interesting that Matt has been working on his Dark Ages forces recently as so have I. I have a huge backlog of audio books to listen to and computer gaming has gotten stale, so it is time to cycle to other interests, like picking up a paintbrush again. And my subject: finishing off my 42mm Anglo-Saxon force for Saga. No pictures yet, but you can find their enemies, the Anglo-Danes, in older posts.

Matt and I have talked about, through this blog and emails, about craft paints. Matt swears by them and I, well, swear at them. I hate the lack of covering power and don't really fancy painting figures several times to get the color I want. Painting larger figures exacerbates the issue as your are painting more surface area, increasing the time and expense. The two things craft paints bring to the table, however, are color range and cost. So it is hard to completely discount craft paints.

Gesso is a compound of plaster of Paris or whiting in glue, often used as surface preparation for wood. I have increasingly been using gesso on my wood projects as it reduces paint absorption in the wood, thereby reducing the amount of paint required to color the surface. When mixed with color, specifically craft paint, it reduces the number of coats required to get the color you want. With some colors, one coat of craft paint and gesso is all that is required.

The issue with gesso is that it is itself colored, either white or black. So mixing it with craft paint changes the color. No matter how much of the paint you put in, it will never go back to that color if it has gesso – white, black, or both – mixed with it. So mixing becomes an adventure in and of itself.

Working on my Anglo-Saxons, I wanted to try and use more 'realistic' colors for the cloth, so I found a page with some yarn dyed with materials available during the Dark Ages in Europe. 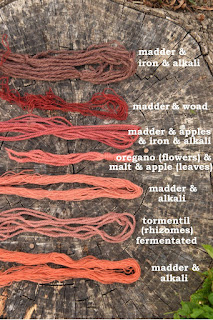 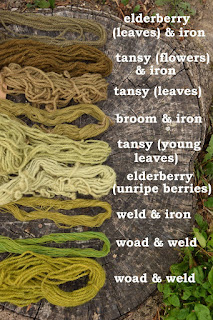 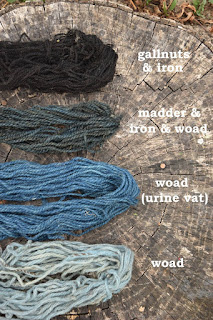 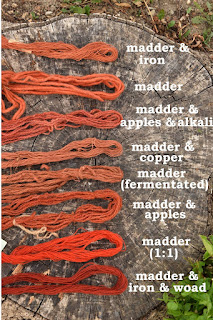 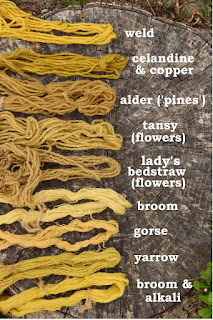 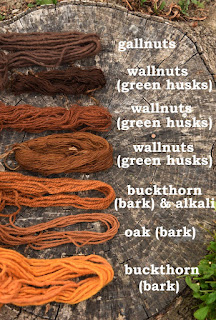 I was actually surprised by some of the colors. Basically, by mixing modern, vibrant colors with white, and sometimes a little black gesso, you can achieve some pretty nice colors for a Dark Ages palette.

So I decided to give it a try. Start with a little blob of white gesso, add some color that is more vibrant than a color similar to the above, then start mixing. Add another color, add some black gesso, and so on. One of the things it does is make the color slightly inconsistent, as maybe a stray bit of color is not as thoroughly mixed as the rest. This adds a nice, minor variation in the color, whether it is on one figure in a large surface area or it is between two figures. 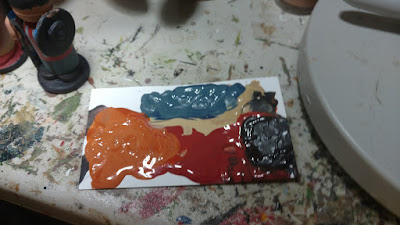 In the end you tend to add a little color to the previous colors, getting more variations in color, and allowing you to paint several figures with like colors, but not exactly the same color. This makes the figures less uniform. Your palette also ends up looking very strange, with colors you used completely obscured.

I am not ready to declare complete success, but we will see after the paint dries on my Anglo-Saxons. I have the cloth parts done, but there is still a lot of work with the shields and the faces, so it may be some time before I get them done, especially as there are 24 infantry and 5 cavalry to do. I will be showing them later. But, I have come to wonder something else. How color-coordinated were they really back in the Dark Ages? Is it okay to combine colors that we would not combine today? Or are we, in the end, doing all of us for our eye?
Posted by Dale at 1:02 PM 1 comment: