First off, I have been remiss in welcoming my new readers. Welcome to Maverick Collecting, Scott B. Lesch, Foss1066, Dan, el frances, littlejohn, Mark Burgess, David Crook, SA ROE, Mr. Monkeytail, and Hammster Chomiczewski! I hope you enjoy the articles and, although a blog is not much of a medium for discussion, I hope you post comments and suggest future topics.

Some new blogs out there that have caught my eye (and are related to this): Little People Go to War, Go! Game Labs, Beighton's Shipyard, and the Skull and Crown (of the famous Wooden Wars project). You really need to check these out.

Of course, blogs I have highlighted before (or think I have ...) are: Toy Making Dad, John Acar's Craftee section, and the Penny Whistle's clothespin work. Again, good ideas and inspiration.

Last but not least, join up on the Wargaming on a Budget forum on Yahoo. There are a lot of like-minded people there. Not always wood-oriented (paper does not count!), but still good information.

I found out that there is a Woodcraft store in Tucson, about 80 miles away from me, so I went and visited it, hoping to pick up a Proxxon jig saw. No luck. They don't carry Proxxon anymore, but could order it. I can get it on Amazon cheaply, so I passed. I did, however, pick up rotary drill bits for sanding and power carving (i.e. carving with Dremel type tools). A total of 120 bits (four sets of 30 bits, each of a different grit level) for $32.00. I was happy. All kinds of shapes and sizes, so I will have some fun experimenting with them.

Update: I forgot to mention that this blog was nominated for Leibster Awards by John's Wargames and Kingdom of Katzenstein. Thanks guys, I really appreciate it. I highly recommend that readers check out these blogs and the others that I have mentioned above. My Dale's Wargames blog was also nominated and I pointed out some blogs to read there too. That said, the goal of the Leibster Awards is to point people to some of the less traveled blogs, and I hope I have done that here.

I have a number of projects going simultaneously, mostly because I suffer from distraction. Starting in the workshop, where the cutting, sanding, and gluing goes on.

My fascination with the miniature rules Saga has got me making a Dark Ages army (or three). I am starting off with the Anglo-Danish. Still being built are the Warriors, which will have spears and shields. Right now I have finished the basic helmet shape and am using heavily-thinned wood filler to try and smooth out the curves.


The horses are for an upcoming Welsh army. I will have the Hearthguard mounted.

I always keep a couple of sets of spare arms and feet, just in case I want to do some experimentation. (I sound like Dr. Frankenstein!) 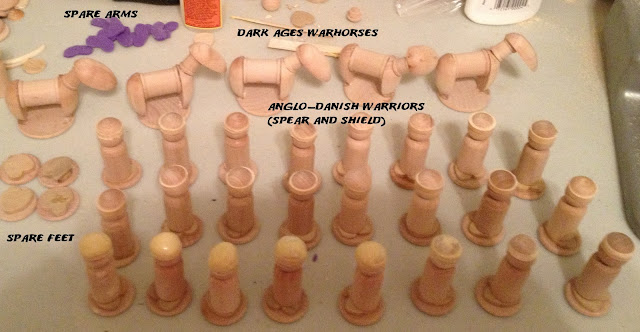 I have had these Napoleonic cavalry – British Light Dragoons and a mounted British Officer – for a long time now. As I decided that I liked the new style of horse (with a spool as the neck), I broke apart the unfinished models and re-worked them. Wait until I do that with fully painted models ...

I accidentally left my wood filler out with the lid not fully closed, causing it to dry up badly. I was about to chuck it into the trash, but decided to look up on the internet and see if there was a way of bring it back. It turns out that Elmers recommends you simply put water into it and stir, stir, stir. I put a little too much and it came out thin. I started experimenting a bit with the thinned wood filler and found that I could use it like "Green Stuff" putty and "sculpt" limited shapes, like beards and long hair. Here I have decided to dip the heads into the wood filler and build up a helmet or cap. As this experiment progresses, I will keep you updated. 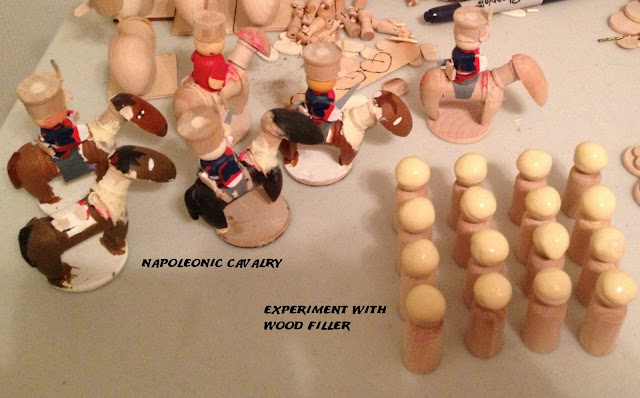 When I was doing the hat experiments (in a previous blog article), I had not finished them, especially with regards to the peaks of the caps. Here are some of the previous experiments, along with two new Knightly experiments (on the right). 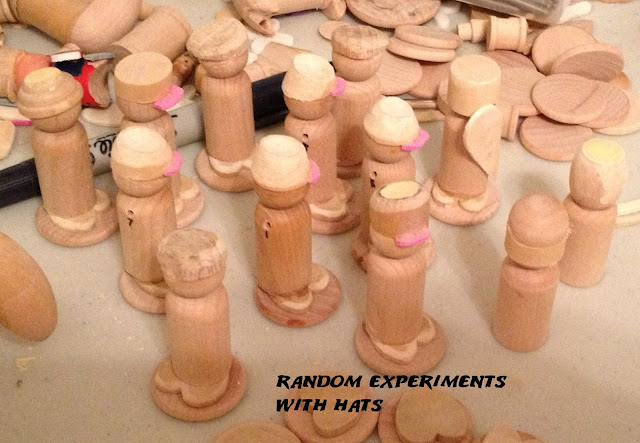 I wanted to experiment with sheet foam to make pelisses for hussars, so I needed to make some basic hussar figures first. Here they are, but no pelisses. (See, this is what happens when you get distracted by new projects before the old ones are done.) 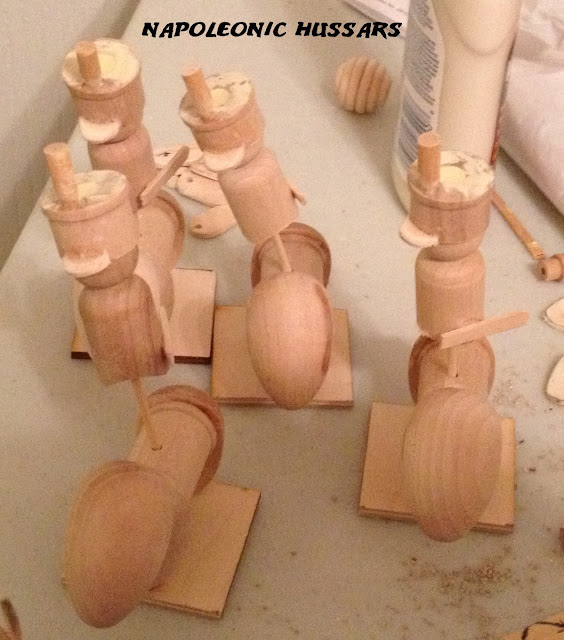 This picture came out a little dark, but it is the modern African soldier in a beret (hat experiments), with an AK-47 (Insta-Mold experiment to make small accessories), I like the camo, but it was tedious to paint. I am not sure I could do a whole squad of them, all in one go. 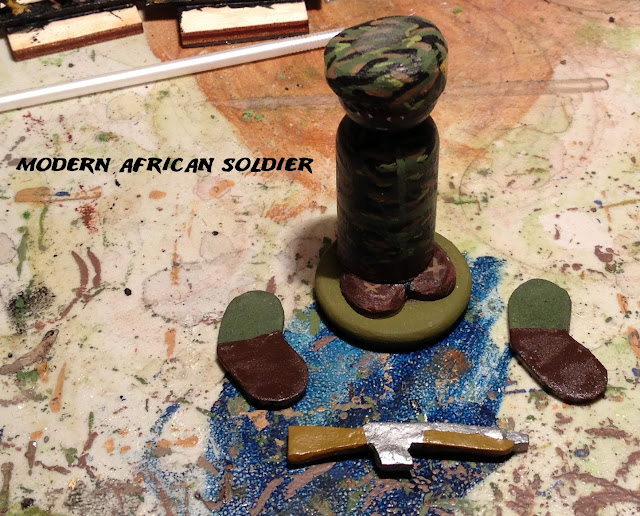 I played a big game of Napoleonics (skirmish) and it inspired me to start painting these Prussian Jagers hat I built six months ago. The officer is a little red faced because I seem to have misplaced one of the painted soldiers, but found two others that I forgot to paint with the others!

Here are the Levy bowmen of the Anglo-Danish army I am building for Saga. The bows were power-sanded from spare bits of wood. They are starting to come together.

These are my current pride and joy! The Anglo-Danish huscarls with 2-handed axes were just plain fun to put together. Axe heads and arms are made of foam. I glued the arms to the axe handles and once dry, glued the arms to the body. Once that was dry I rubbed super glue (Gorilla Glue Super Glue, of course) into the foam and then pinned the arms and axe handle into the position I wanted. Once the super glue was dry the pose stayed put. I then glued on the axe heads.

You can see the Anglo-Danish Warlord, with his Danish axe, started on the lower left. Using sheet foam and zig-zag cutting scissors I created a horse tail plume for his helmet.

Well, that is it for now. Hope you like the sneak peek at the projects to come.
Posted by Dale at 8:40 PM 1 comment: