Played in the Lankhmar game a couple of weeks ago.  It was really fun.  The DCC version is probably the best one that I know of on the market.  I like it slightly better than the old AD&D 1st or 2nd edition attempts, and I definitely like it better than the Savage World Lankhmar game books although I will say that they are very beautiful and well-done books.  I just don't like Savage Worlds that much as a game system.

Anyway, all this means I just did more figures.  And actually, I have all the figures done for the first part of my Lankhmar minis convention game that I want to do.  A few more bravo/thief types and I will have them all finished.

Anyway, here are some wizards for you.  The one on the left with the rat familiar is the infamous Hristomilo reading his arcane scroll.  The one on the right is one of the PCs in the game, a Mingol wizard from the Steppes. 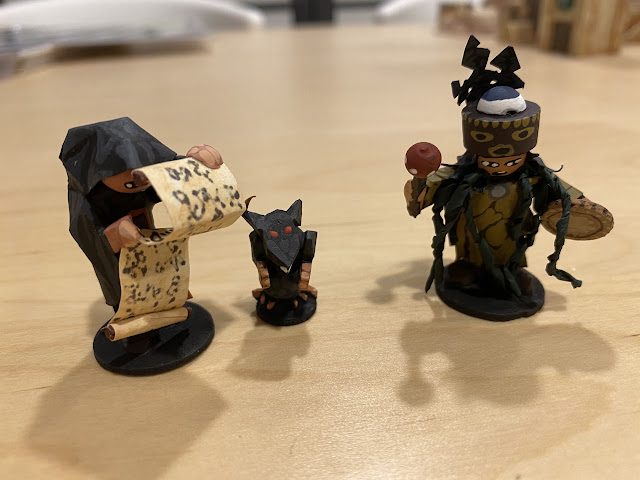 Hrisomili is simple, he is just a milk bottle body with a large cap on the top with his head glued down on the cap somewhat to give him the proper "hunch back" posture and tall height that he has in the stories.  His scroll is just parchment paper wrapped around toothpicks on each end, then glued to his hands in a way that makes it look like he is reading it.

Next to Hristomili in the middle is Slivikin, his rat familiar.  He is supposed to have human-like hands.  Can't really see them well in this picture but that's okay, he's just a rat.  Tile spacer head, arms, and feet, with a body that is two beads, smaller on top of larger.  He has a paper tail that you can see better in the next picture.

The PC Mingol wizard was really tough to do, but I'm really happy with how he turned out.  The player wanted me to use actual Mongol Shaman as inspiration and they look really cool but they have these long hair-like things coming out of their hats that fly around impressively as they chant and dance.  It looks extremely cool in real life, but trying to mimic that in one of these figures was tough.  But I did it with twisted paper and I think it looks good.  He's got his interesting drum in his left hand and drum stick in the other.

Now for a rear view. 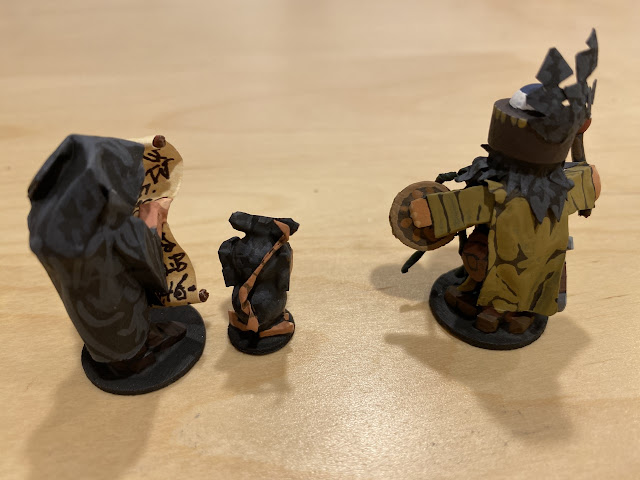 Better view of Slivikin's paper tail and Hristomilo's spell scroll.  Two very different looking wizards, but both very consistent with those in the Lankhmar setting.

Now onto some bravos ... 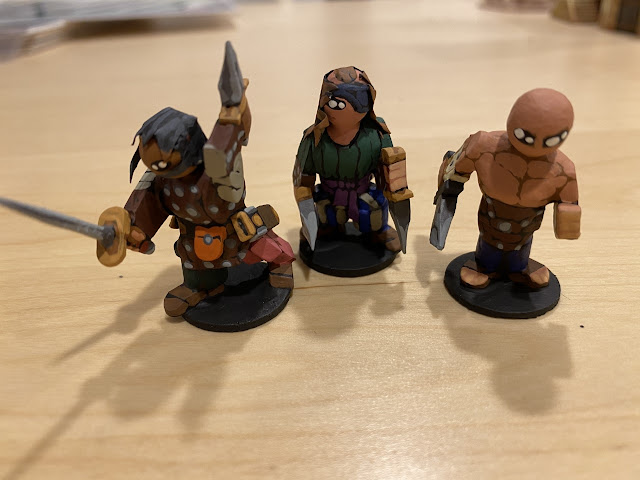 Lots of inspiration for these from the graphic novel.  The only interesting build here is the bald guy on the right.  He is the first shirtless guy I tried doing using in this case the small barrel bead construction (I didn't want him as big as the barbarian figures but I still wanted him to look muscular).  I put a leather armor girdle around his waist to give him some protection.  He originally was going to just be wearing a loin cloth but I did the legs wrong for that look.  I will try that again in the future though.  Also, the middle guy has two legs that are made using the plug construction with no tile spacer leg like I did with the lunging figure like the Mouser.  I wanted a crouching guy and I am happy with him too.  He actually looks better in person.  Plus he has an eye patch! 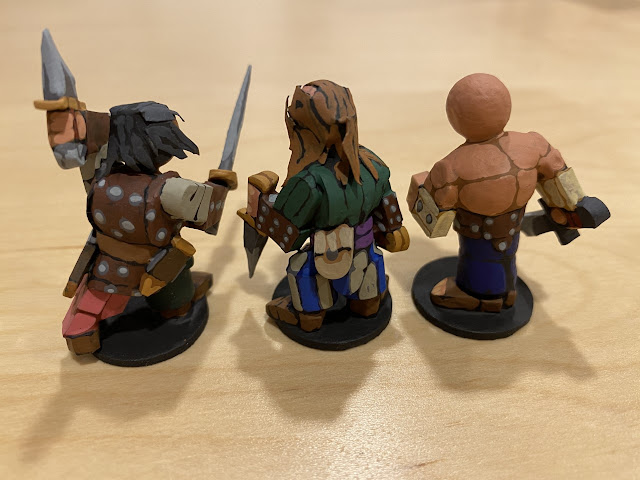 And now for the two thieves these guys are guarding.  Their names are Fissif and Sleyvas and they are from the story "Ill Met in Lankhmar" as is the idea for the minis game, to be honest.  Fissif is a "fat" thief and Sleyvas is supposed to be tall, though I didn't make him that tall. 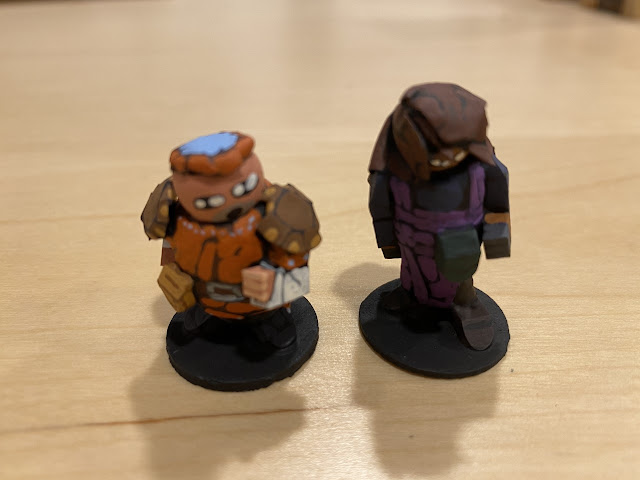 Again, the inspiration for how these guys look comes from the graphic novel.  Sleyvas is nothing new, milk bottle body construction.  Fissif, however, is new.  He is a large barrel bead for his entire body and lower legs, but the bead is vertical instead of side ways like it is in the barbarian and other "strong guy" figures.  He has tile spacer arms and feet, a bead head, and paper is glued to cover the top and bottom of the barrel bead.  His hat and shoulder pads are paper. 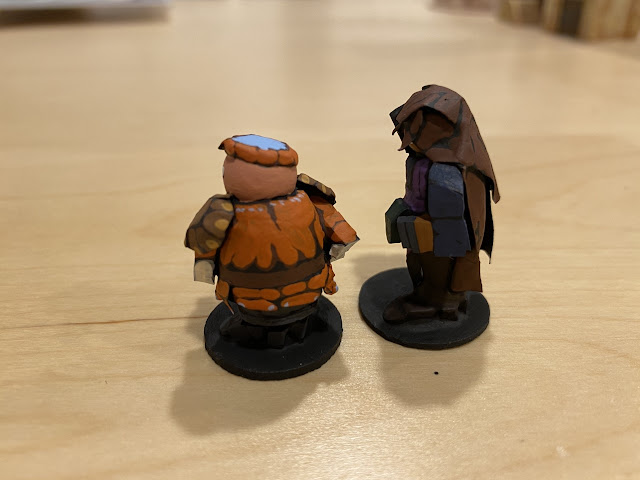 I am particularly fond of Fissif but that's not surprising, even in the stories he has far more personality than Sleyvas.  I just love his jaunty little cap!

I've got a slinging thief and another probably bravo character on the painting table.  I also want to try making some of the buildings that will serve as the terrain in the first game.  The three bravos are escorting Fissif and Sleyvase from one board edge to the other and Fafhrd and the Gray Mouser have to get the treasure from the two thieves without killing them (but they can kill the bravos) before the thieves get to the other side of the table.  Ambush and swordplay abounds!
Posted by GrayMouser65 at 9:41 PM 6 comments: