Here is the futuristic armored guy. 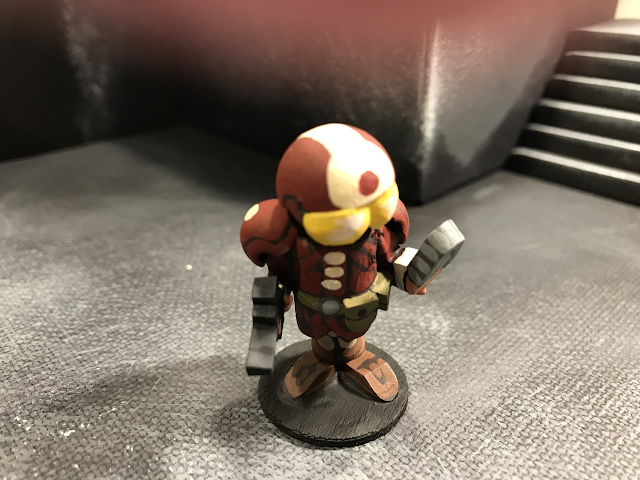 Here is the Police armor guy.  I forgot that I gave him a flashlight on his belt! 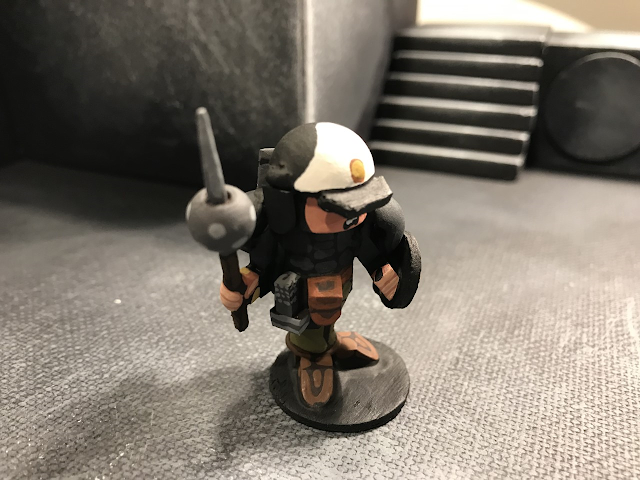 And here is the trench coat old army helmet guy with the medical kit. 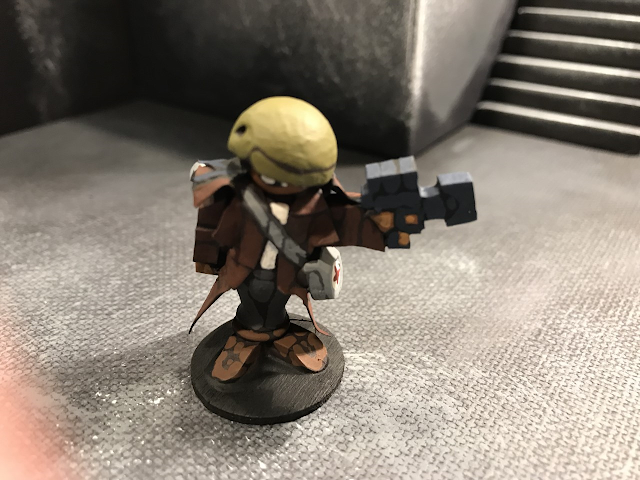 The trench coat was a bit of a challenge, I'm sure I'll get better at doing them the more of them I do.  But you gotta start somewhere!
Posted by GrayMouser65 at 11:00 AM 2 comments:

First off, it's good to be back!  My eyes are still somewhat up in the air.  I won't go into detail but I will say just when one of them started to improve after the surgery, the other one started acting up so I had to go back to weekly visits.  Things have been stable now for about 3 weeks and I can see pretty well now.  So I finally got the desire to go back to painting, but I needed a break from the Dark Ages guys I've been doing, and I wasn't ready to start the Battle of the Five Armies project (looks too daunting at this point!).  So luckily one of my rpg groups is having me run a Gamma World game.  They seem to like my wooden fantasy guys that I've been doing so I thought, "I should be able to do some post-apocalyptic sci-fantasy guys for a Gamma World rpg!"

For those of you who may not know, Gamma World came out from TSR (at least the 1st edition) right about the same time as 1st edition AD&D.  The DM's Guide for AD&D even has an appendix dedicated to transferring characters back and forth between AD&D and Gamma World.  GW is a "sci-fantasy" game which to me just means a more "gonzo" type sci-fi game, not a realistic one.  The world has these strange mutants, androids, killer robots, etc., but it essentially plays a lot like AD&D it's just in a sci-fantasy world with radioactive wastes and ruined cities instead of the traditional Dark Ages or Medieval fantasy world common to AD&D games.

Anyway, here are three human survivors for Gamma World.  I wanted a mixture of technology levels so you've got all the way from a trench coat with a WWII army helmet to modern cop outfit to futuristic body armor guys here. 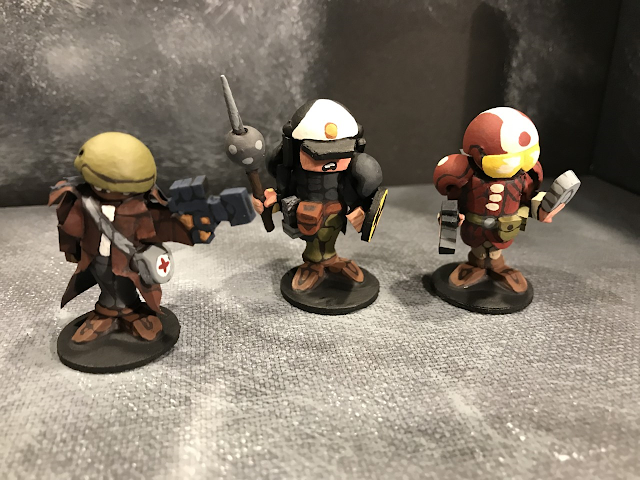 I also wanted to give them a mixture of weapons, so I've got the old army helmet guy with the most advanced blaster pistol, the cop armor guy with a hand made mace type weapon, and the futuristic guy with a laser pistol and hand held scanning device.  Here they are from a top rear view. 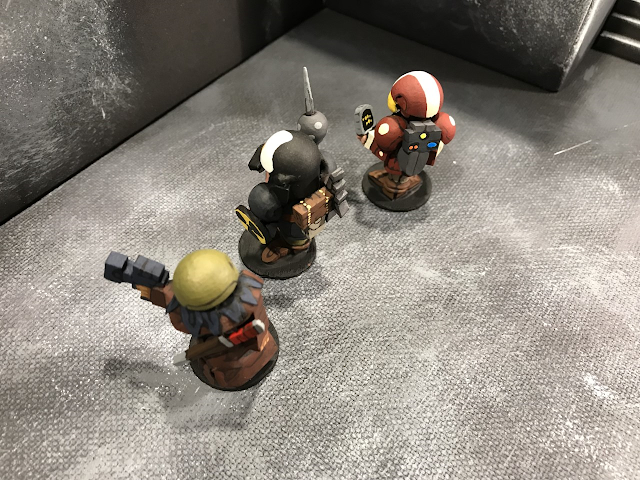 Hard to see but the one in the middle, the cop armor guy, has a shield that has the radioactive symbol on it and he also has an AR-15 type assault rifle on his back.  The trench coat guy has a katana, and the futuristic body armor guy has some sort of oxygen tank or something on his back.

They were fun to do, nothing too much new construction wise except for doing the guns which was fun to carve out of the tile spacers.  The futuristic guy does have oversized "goggles" as a part of his mask, but they are just made from one small bead split in half one for each eye.  It's easier to see in the first picture.

Now off to make some enemies!
Posted by GrayMouser65 at 8:28 PM 4 comments: