One of the things I have been pondering is a better looking musket, while still having it pretty simple to make. Previously, I took a flat toothpick and simply cut the rounded end off, then painted the pointed end as the bayonet. Very simple and it give a good effect, but very 2D.

I started looking at the round toothpicks used by others for their figures' spears and decided to give it a try to represent the bayonet. So, I clipped off the rounded end and the pointed end to make the musket, then glued the pointed end of a round toothpick to the smaller end of the flat toothpick. It now gives a nice effect of a musket with the bayonet properly offset to the side, with little extra effort. 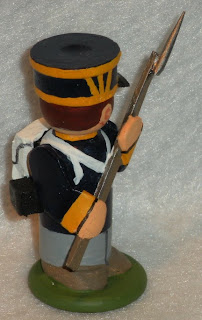 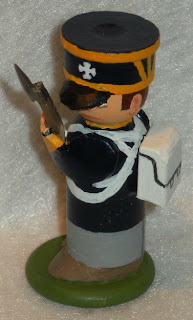 All that remains is to see if it stays glued to the figure...

By the way, this is the finished Napoleonic Prussian Landwehr infantryman. I am sending him off to my painter in Edmonton, Bob Barnetson, as a sample for the rest of the figures to be painted (a total of 12 men in defending pose and two skirmishers in firing pose). This will be the first time someone else will have painted figures of my own creation, so I am looking forward to feedback from Bob on whether he finds this (freehand) style harder or easier, wood harder or easier than metal or plastic, etc. That and if he likes painting the figures, it will allow me to focus on making the figures while he paints them. So I may one day get to my "dream game" of hundreds of 42mm wooden toy soldiers on the table in a small Napoleonics battle.
Posted by Dale at 9:39 PM No comments: