New Conan Game for Scrum Con - Swords Against the Cult

I am doing two Conan games for the upcoming Scrum Con in Silver Spring, MD in April of this year.  One of the games is the Conan game I did at Barrage two years ago.  I wanted to do two different Conan games for Scrum Con, so I picked another famous part of the original 1982 Conan the Barbarian movie.  The other two possibilities to me were the raid on the snake tower to get the gem and kill the giant snake, or the raid to capture the princess.  I went with the later just because I thought the terrain would be easier ... although in hindsight it has taken me three weeks to build this layout and I think I made an wrong calculation about which terrain would be easiest!

I am going to do something I don't normally do with terrain which is post a picture of the layout completely built, but unpainted.  This I hope will give a sense for how "rough" things look until you actually put some paint on them ... the paint to me anyway is the "magic."

Here are some shots of it on my basement floor.  The "board" is 3.5 feet long (a little longer but just a couple of inches) and 18 inches wide.  It's made out of craft foam (the thick 6mm kind), wooden craft pieces, and rubber tubing.  It's more or less finished (I have one more detail to add to the snake pillar but it's just a minor cosmetic part of it). 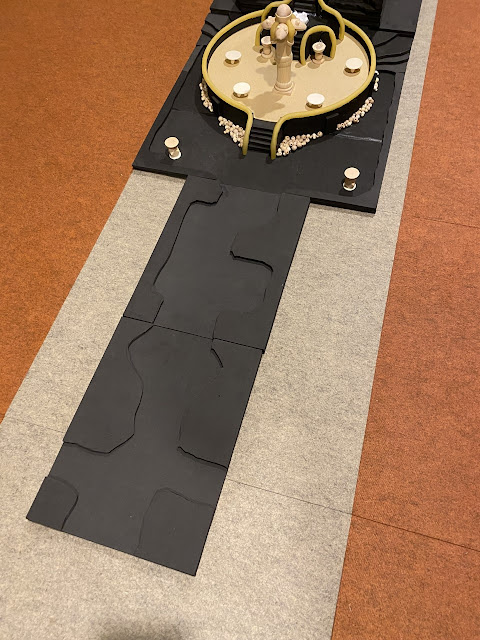 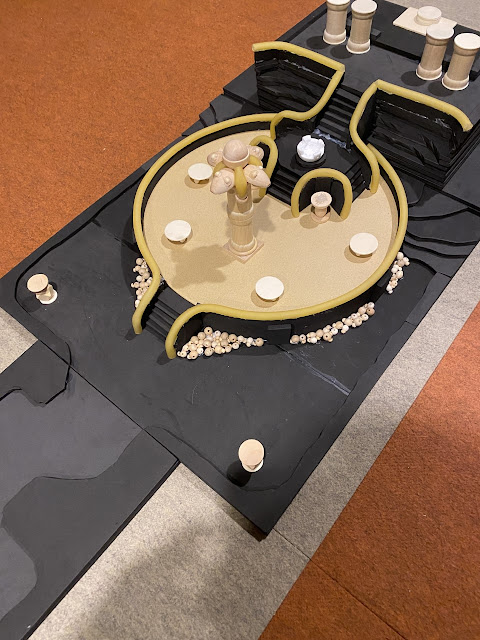 The beads around the base will be painted as skulls (nice, right!?) and they are glued to the foam at this point so they won't move during play.  The circular raised platform is the top of a very large (13.75" I believe) paper mache box.  The round tubing was hot glued onto the foam.  In the movie, there is a rounded "railing" like feature on the stone, and this tubing was the easiest way to get this effect.  We'll see how it looks painted but I think it will look good. 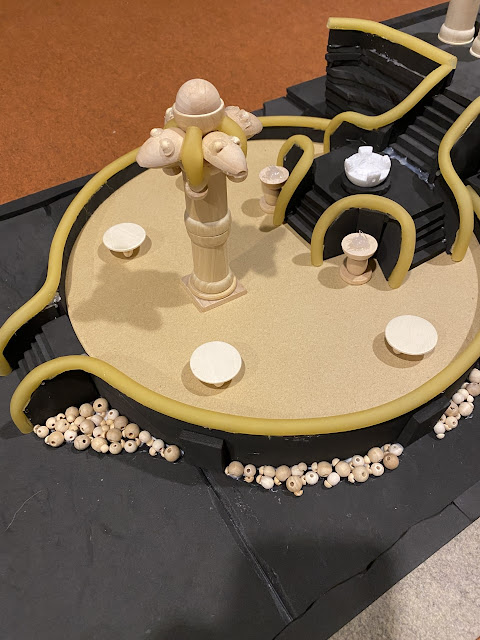 You get a better sense for the tubing here.  The smaller wooden pieces on each side of the stairs up are burning light sources for the room.  The styrofoam white piece is the stone bowl that holds the "pea soup" in it in the movie.  It can be moved so if Conan wants to push it over, he can.  The snake pillar in the middle will have another architectural feature under each of the snake heads, but this is more or less what it is going to look like.  It, too, is not glued to the raised circular platform so it can be moved if needed.

Here is a view from the rear of the whole game board. 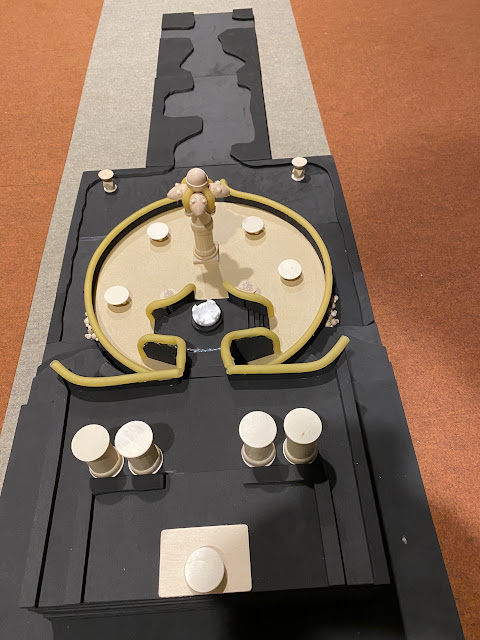 The top layer is where Thulsa Doom (the figure will be on the circle in the rear of this picture) and the princess are located.

I have all the figures done as well except for the three heroes, Conan, Subotai, and Valeria.  But I will show the figures like I normally do, after I paint them.