Barrage 2022 Battle of the Great Pit of Carkoon!

Got back from Barrage last night after running two games on Friday and one on Saturday.  This was the first year I had made it on a Friday (usually tough for me because of work) and while there were definitely more people there on Saturday, there was still a good crowd on Friday.  My game can hold up to 4 players and I had 2 players for the first game and 4 for the second game on Friday.  Saturday I actually had 5 and being the great gamers that they were they divided up the heroes so that all 5 people could play.  As is often the case with me, I ended up taking no pictures of game 1, some of game 2, and some of game 3.

The game starts out the same way each time.  Here is the general layout. 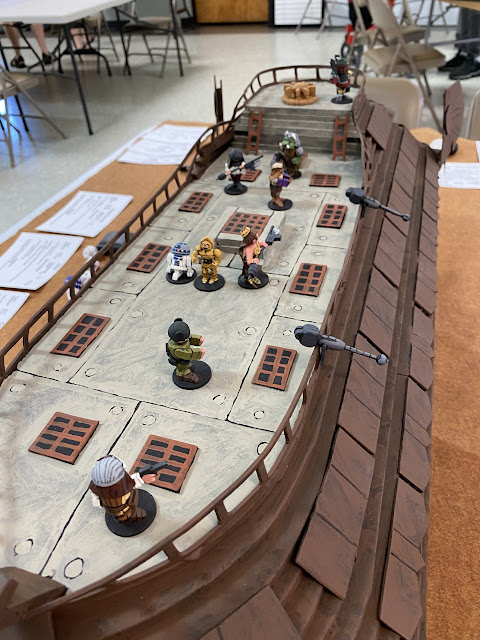 Jabba's barge flanks one side of the playing area.  Leia has already dispatched Jabba at the start of the game and has made her way with the two droids onto the deck of the barge.  Some of Jabba's henchmen are up there, two of which are there to man the two large guns that can be used to damage the skiffs.  The guy closest to the bottom of the picture is the henchman who ends up in the movie shooting Luke in the hand after Luke makes his way onto the deck of Jabba's barge towards the end of the battle.  You can't see him in this photo but Boba Fett is up on the raised rear deck of the barge. 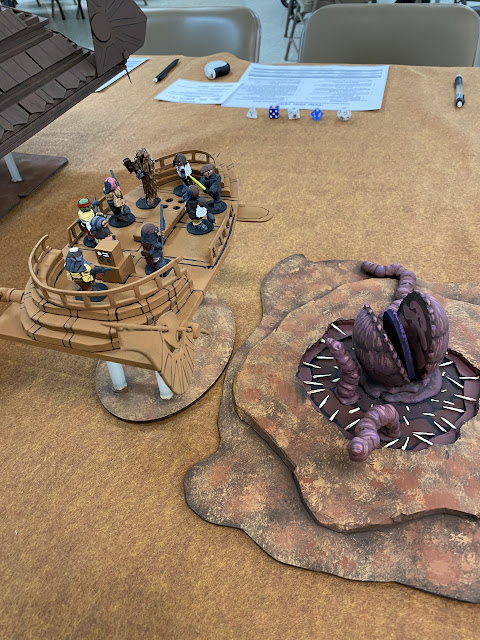 This is Skiff #1 which has Luke, Chewie, Han, and Lando on it along with five of Jabba's henchmen.  In the first game I allowed Luke to start on the skiff rather than on the plank.  In the second and third game I made him start on the plank to reduce his movement options.  The sarlacc waits hungrily below. 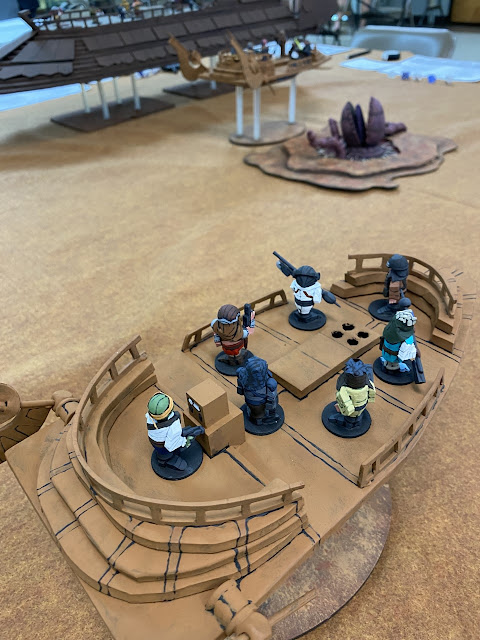 Skiff #2, manned just with Jabba's henchmen, begins quite a distance away.  The challenge is it has two melee guys on it but it has 4 shooters, so that is a lot of shots for the heroes to absorb before they can do much about this second skiff.  So having them be far away reduces their shooting die making it less likely for them to hit and to give the heroes a chance.  The pilot of the skiff is not allowed to do anything but a "Move" action which is what is used to drive and stabilize the craft. 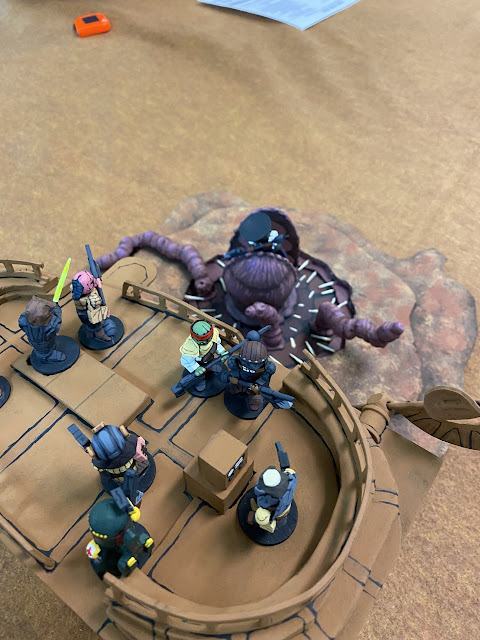 You can see that this is well into the game as Boba Fett has made his way down to the deck of Skiff #1 to try and dispatch either Luke or Han.  Lando is in a fight, but you can see one of the henchmen in the mouth of the sarlacc, most likely tossed there by Chewie.  Rather than causing Hits in melee combat Chewie can opt to instead throw one enemy in melee with him into the sarlacc pit.  This is usually the better option for Chewie unless he causes a lot of Hits and could possibly take out several henchman at once.  But an auto-kill is always a good thing! 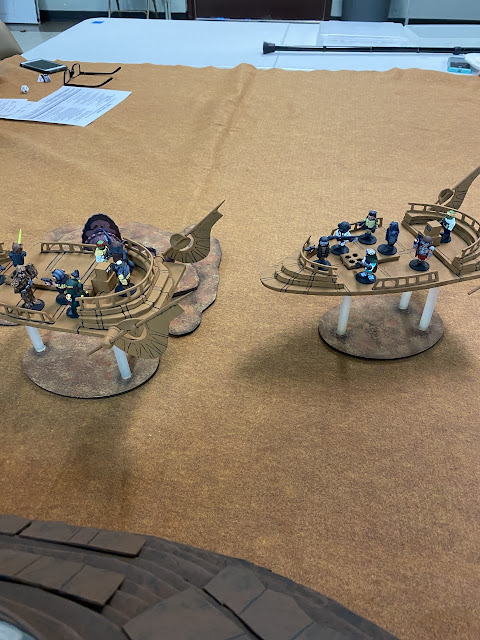 Skiff #2 has moved closer to Skiff #1 at this point and this takes away the ranged penalty for the shots from these henchman.  Things are getting very serious for the heroes at this point! 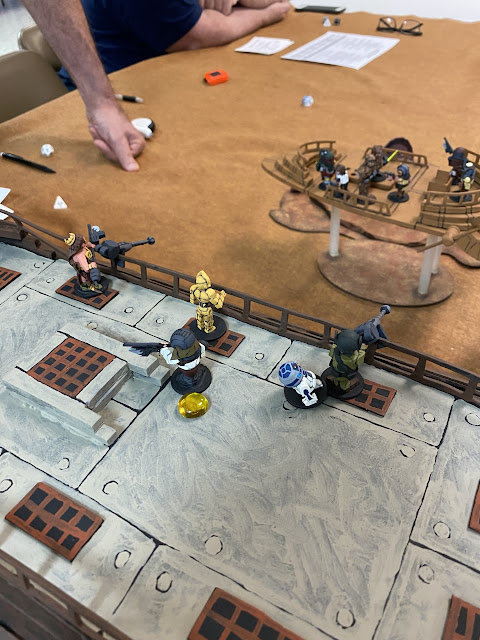 By this time Leia has managed to man one of the guns and is putting shots onto Skiff #2.  Brave R2 even though he is not good in combat, changes the henchman manning the other gun ... 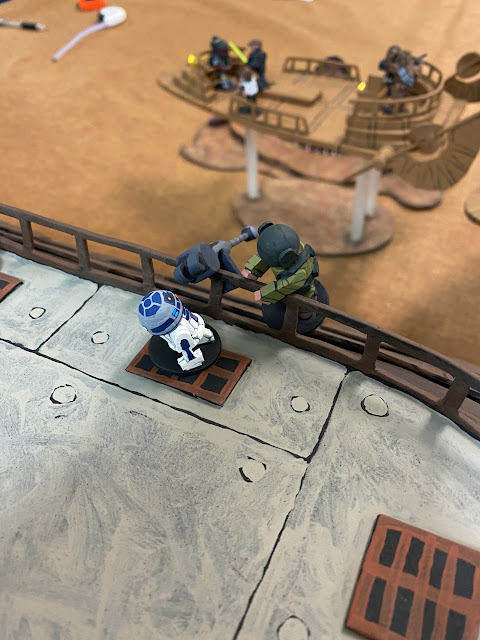 ... and through an act of the Force (has to be!) manages to win the melee combat and push the henchman back 1".  The henchman is allowed to make a roll to hang on and keep from falling, which he passes, but he is clearly in a bad place! 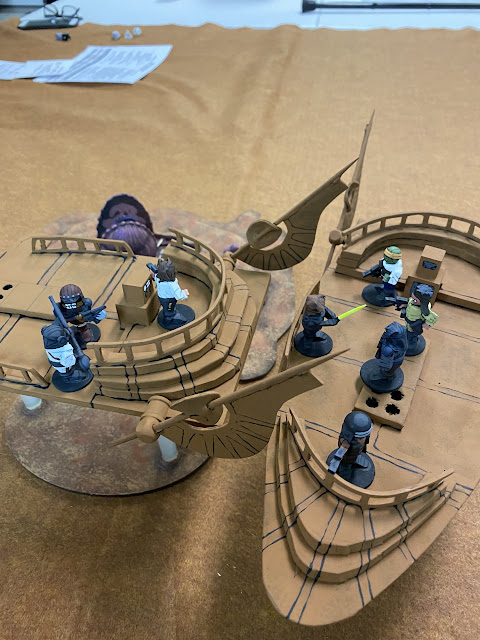 This is the last picture I have of game 2, but you can see Luke has made his way over to Skiff #2 and is dealing with all the shooters there.  Some shoot at him but some also shoot at Leia, especially now since she won't shoot at their skiff anymore because Luke is on it.

Game 3 was a real nail biter because the players lost Han by the third turn I think.  I was very worried.  He is essentially the only consistent shooting that they have, and not having that makes it very difficult to deal with Skiff #2.  Leia and R2 (who can use his anti-fire spray to block LoS for one of the deck guns for 1d4 turns) can pretty well handle the shooters on Jabba's barge.  It's Skiff #2 that is the problem and usually Han is best served to pick them off one at a time.  But with him gone early, and the Luke player having really, really cold dice, it was touch and go for the players in this game.  Turned out that Leia and Chewie were the major players in this one with Lando providing some needed support. 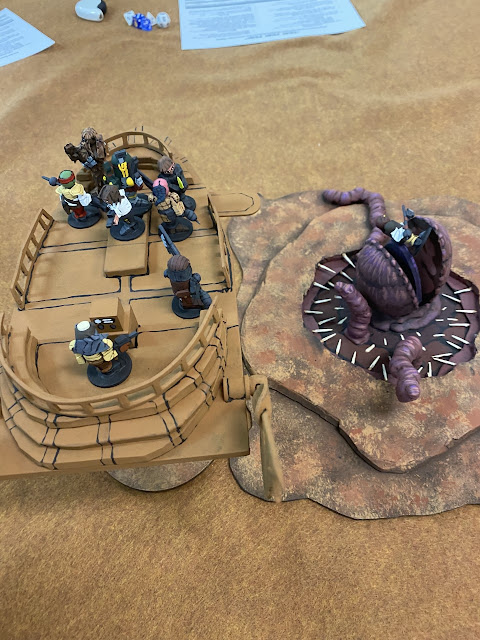 Chewie has already tossed one henchman into the mouth of the sarlacc.  You can see Han fighting against Boba Fett in melee combat here.  Boba Fett gets an incredible roll, Han's player fails his Wound check twice (using a reroll to try and make it) needing only to roll a "3" or more on one of the 1d6 rolls, and he rolled a "1" and a "2".  Ouch. 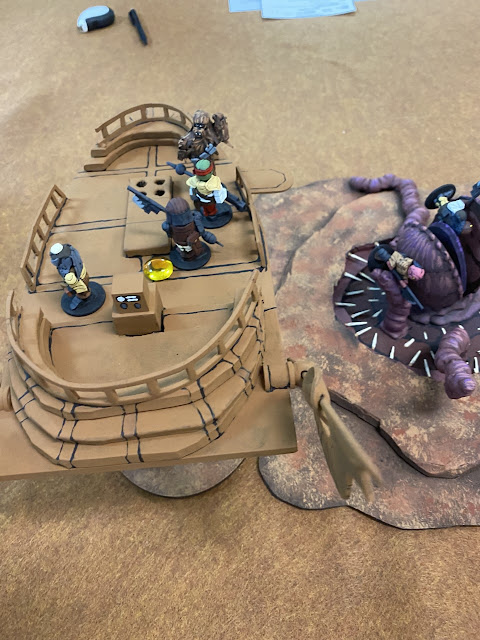 Chewie and Lando are "clearing the deck" of henchman.  The gold bead indicates that Lando is shaken and will have to rally before doing anything else on his activation. 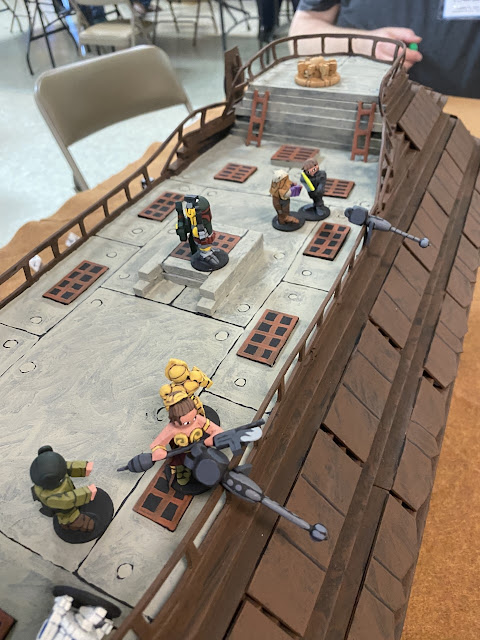 In the 3rd game, Leia and the Droids were the first to activate and the player brilliantly had her move to and man one of the big guns.  Great decision, and this probably saved the heroes in this game.  The player got a little unlucky in that Leia was able to shoot Skiff #2 regularly, but the GM (me) got incredibly lucky and made almost every armor save for the skiff ... almost every one ...  :-)

You can also see that Boba Fett has now flown back onto the deck of the barge to deal with Luke who used his Force ability to move up here and occupy the henchman who wants to man the other gun.  You can also see that R2 is down.  Got into melee, but lost and became "Frazzled" after failing his wound check.  C3PO would later repair him. 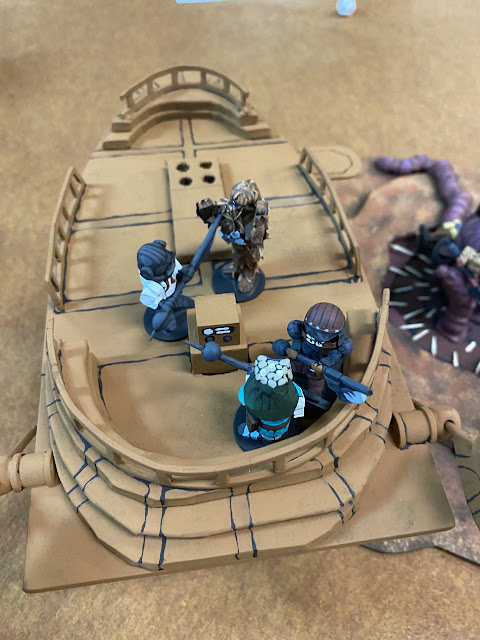 Some of the henchman from Skiff #2 have moved over to Skiff #1 after it got close enough.  No problem though, Lando and Chewie make short work of these guys. 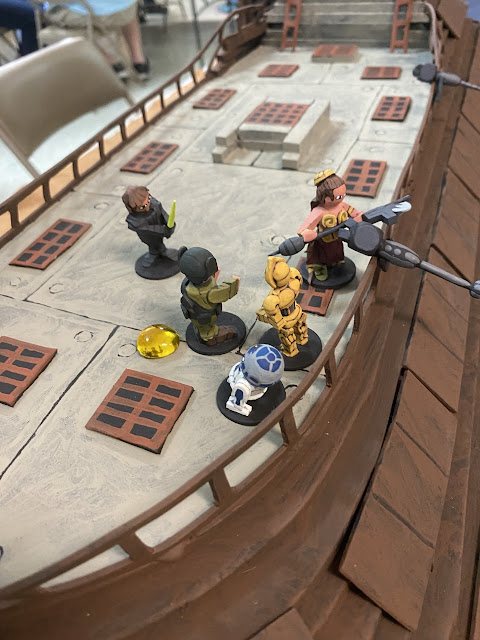 R2 is back and Luke is about to take care of the last, shaken, henchman while Leia blasts Skiff #2 over and over. 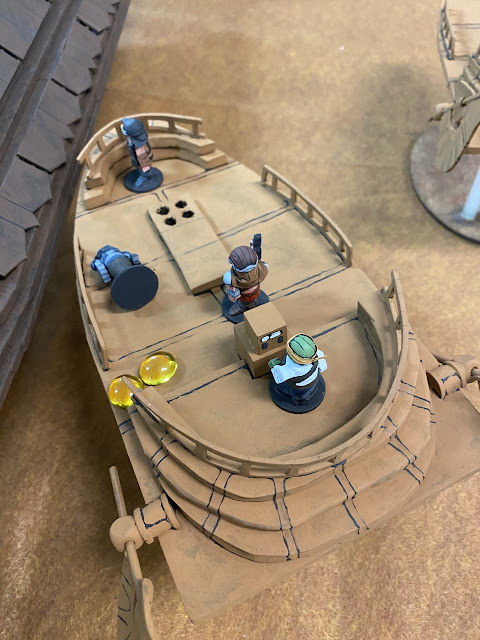 When a skiff is hit by a deck gun, the figures on it must make a roll or be knocked down, which forces them to use their next action to try and stand up.  The two gems mean that the skiff has suffered two damaging shots.  One more and it's toast. 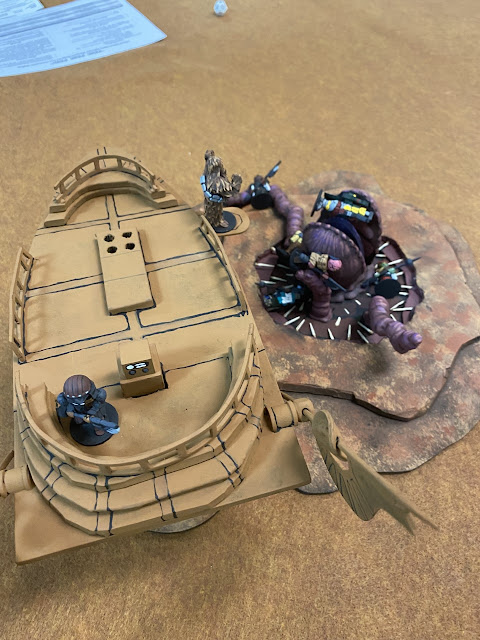 Chewie roaring and celebrating, looking down at all the henchman he has thrown into the sarlacc pit! 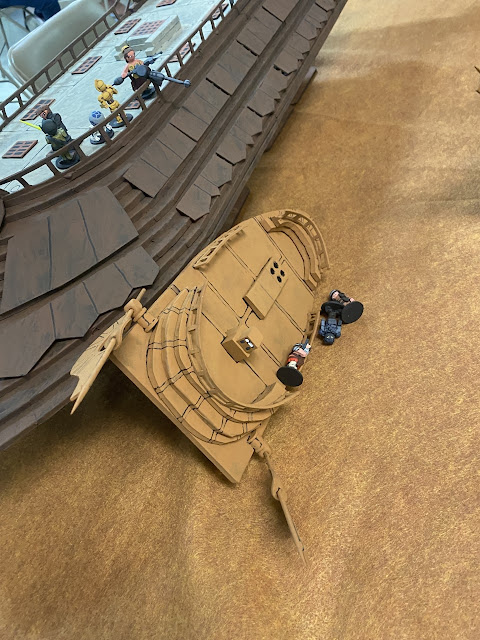 Leia is finally able to hit Skiff #2 and I failed the armor roll ... destroyed.  The guys on the deck fall to the sand with the craft and are defeated.

As usual, I had a great time at Barrage.  I have a lot of friends there, and I always have a good time when I go.  Already looking forward to next year.