Spent yesterday at the Barrage wargaming convention and as always, I had a blast.  It's just a fun relatively small local gaming convention where I get to connect again with old friends (so good to see you Chris!), play games with the "regulars" from the Hawks who always play in my games (good playing again with you Rob and Norman!), and chat with my gaming heroes (thanks again for playing in my game, Zeb!).  We missed 2020 because of COVID obviously, so the last Barrage I went to in person was 2019 where I ran a Lord of the Rings game.  This year's game, as you know if you have been following this blog, was going to be Conan!

As is always the case with Barrage, I offered two games and had two great groups of players.  The organizers also gave me a table to myself so that I could leave my game set up in between the two games.  This is really not an easy thing to do, and I really, really appreciated this.  Thanks Hawks convention planners!

The game is co-op which is different than most games a minis conventions like this one, but the players in both groups embraced the necessity to use team work and seemed to enjoy the games.  Here are some pics.  Most are from the first game.  I was so tired for the second game that I didn't take very many pictures but there are a couple. 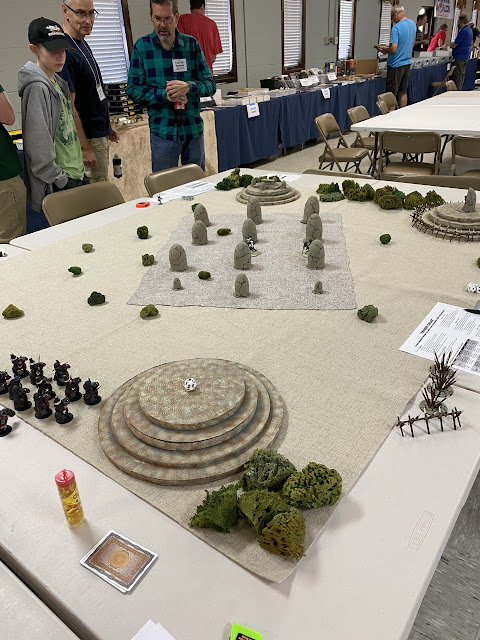 Onlookers soaking in the "weird" figures. 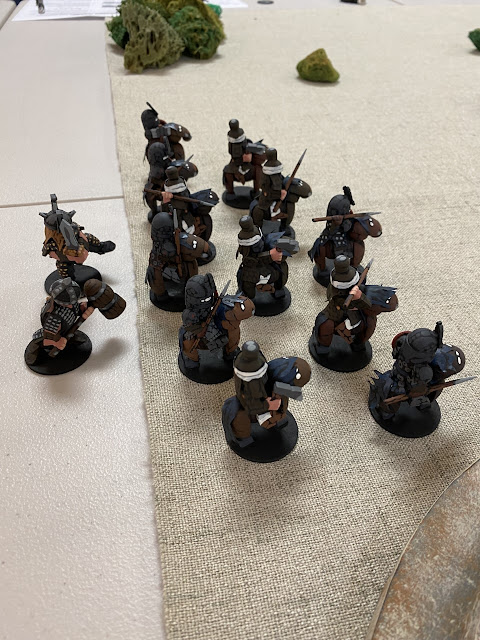 Speaking of "weird" figures.  We've got the two groups of riders as well as the anti-heroes Thorgrim (with maul) and Rexor (with sword).  The riders come on in turn 1, the two anti-heroes come on after turn 3. 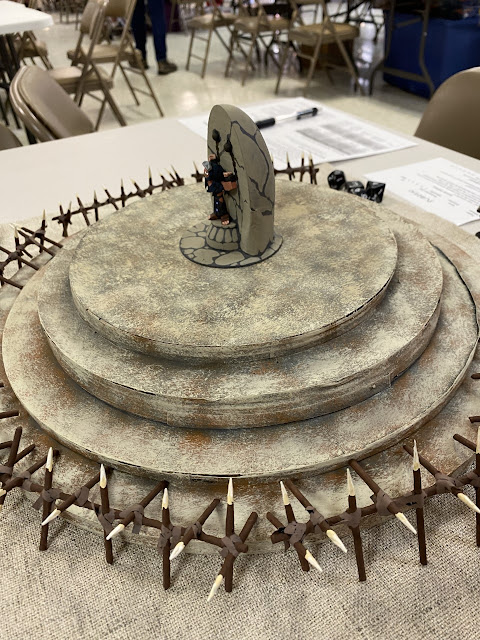 Princess restrained so she does not flee back to Thulsa Doom! 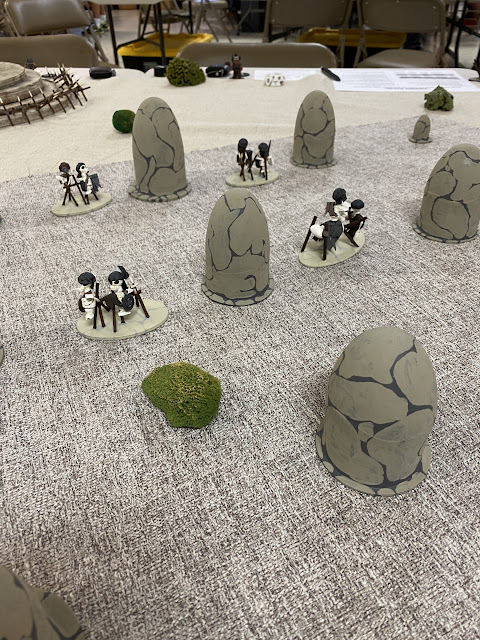 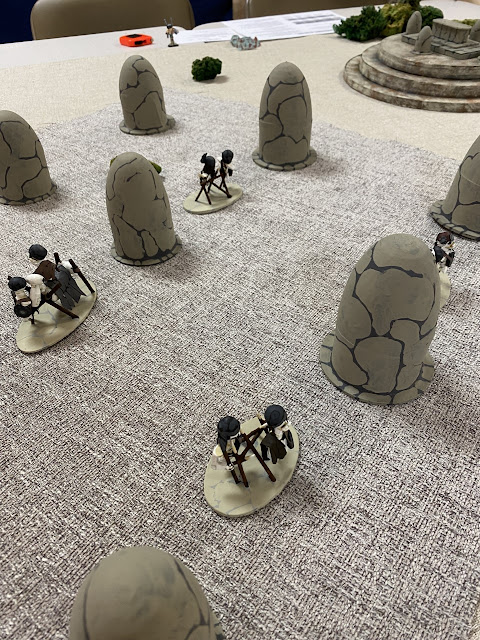 After playing the test game I realized that I needed more visual interest in terms of terrain.  I added more sponge/bushes, which helped a lot, but I realized after watching the scene from the movie again the scarecrow skeletons of the long dead warriors who fought eons ago on this battlefield were very important in making the battlefield look distinctive and interesting.  So last week I threw together some skeleton terrain features (that the heroes can hide behind) including a skeleton horse cavalry figure! 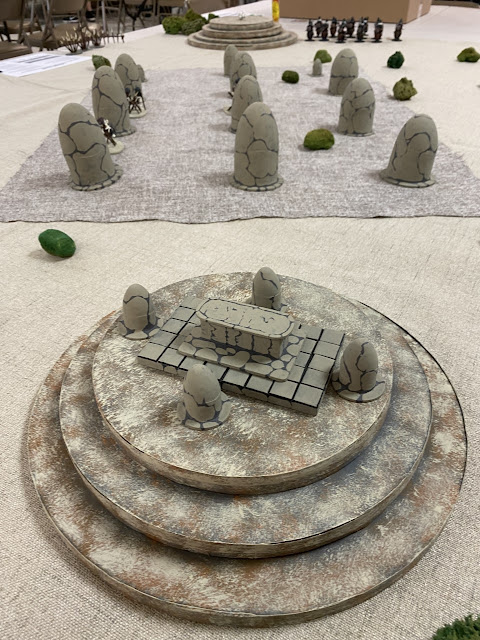 A view from the player's side behind Valeria's funeral pyre. 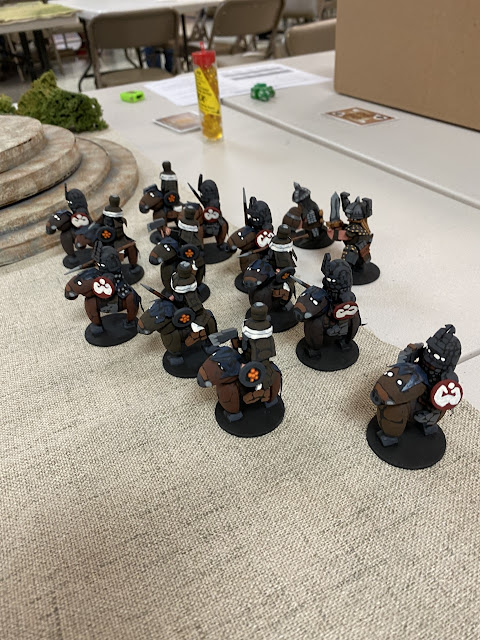 Another view of the riders and anti-heroes from the other side at the start of the game. 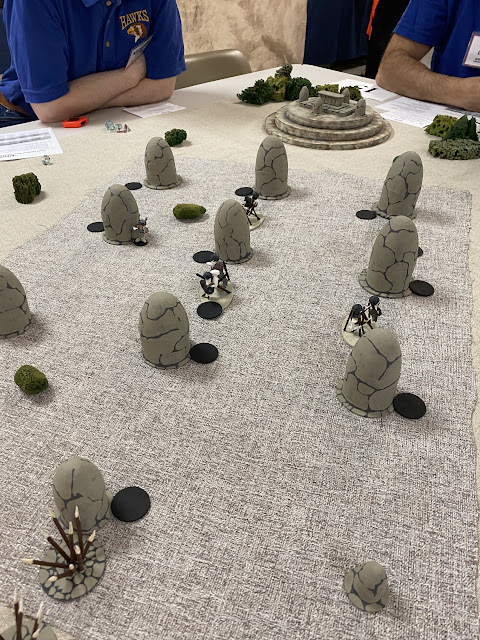 First Turn:  Valeria charges off the pyre towards the riders!  You can see her next to that boulder in the upper right of the picture. 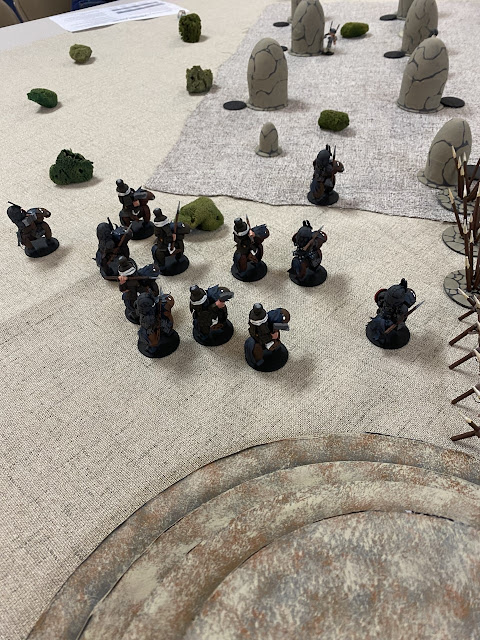 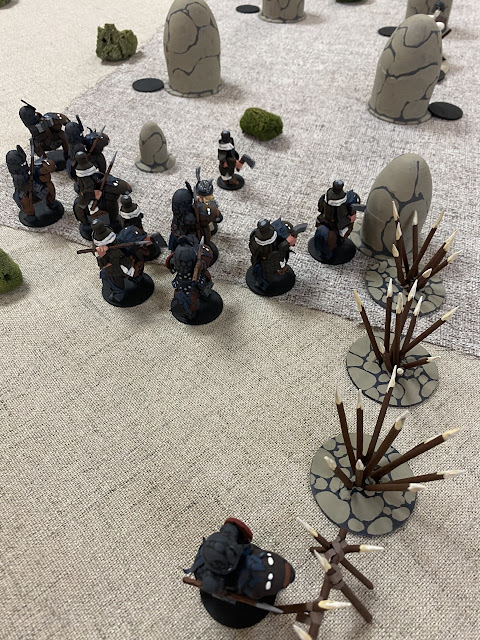 Brave Valeria charges into their midst!  "Get away from my man!!!"  You can see how this group used the three clumps of sharpened sticks and the one row of them (bottom of picture) to funnel the riders into one area of the boulders.  The riders can move through these obstacles but it takes several turns and really slows them down.  This keeps them from using their fast horses to ride around the side of the heroes and get to the princes!  The rider in the lower part of the picture thought about trying to ride around these pointy sticks, but later thought better of it.  It just takes too long! 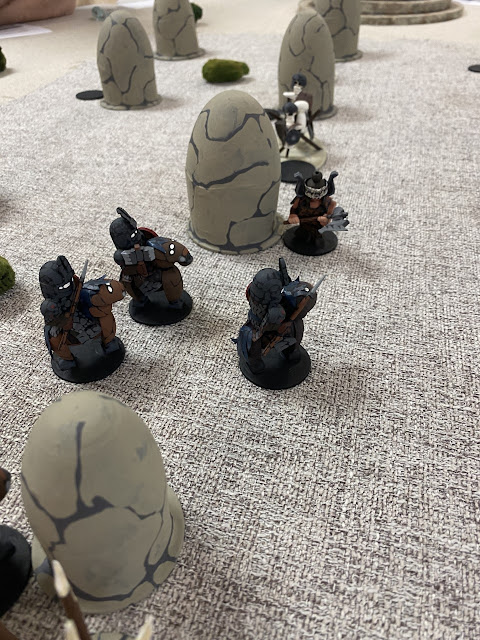 Conan leaps out from behind a boulder, surprising the riders! 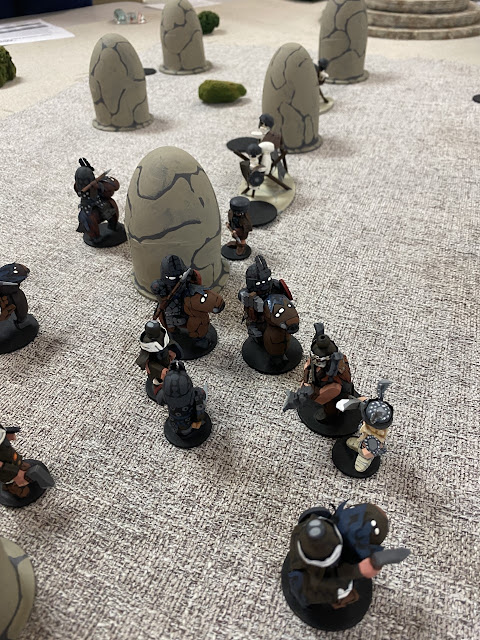 This was a very interesting combination during the first game.  As predicted, Conan and Valeria stand side by side trying to keep the riders at bay.  However, Akrio can be seen behind a boulder in the upper part of the picture, preparing to charge a rider from the rear by surprise.  The enemies on foot were knocked from their horses at some point and are now having to fight the heroes on foot. 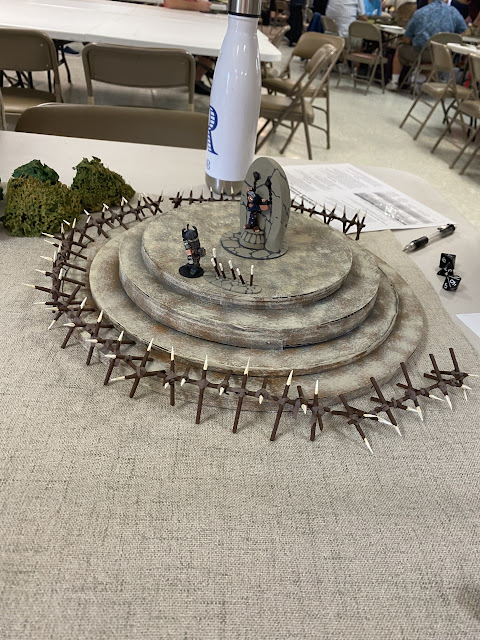 The first group of players pulled Subotai back to the princes to protect her from Thulsa Dooms magical snake arrow which the heroes cannot stop from being fired.  But by having a hero next to the princess, the hero can take the shot from Thulsa Doom instead of it automatically killing the princess, causing the players to lose the game.  Subotai is making his last stand reloading as many of his spent arrows as possible from those he stuck in the ground on top of this burial mound before the battle began.  He took two wounds from the magical arrow from Thulsa Doom but saved the princess! 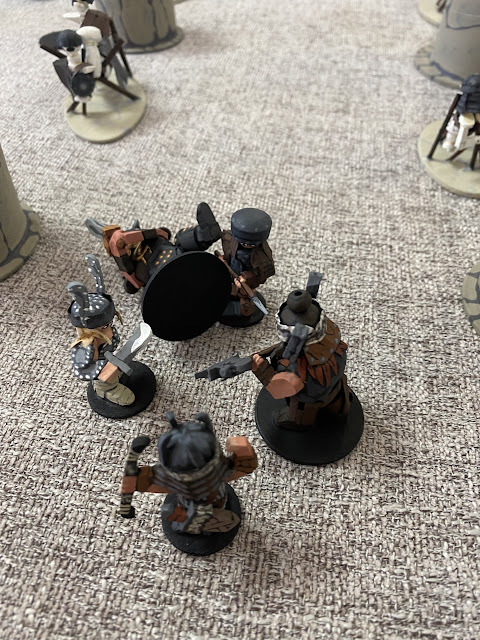 All four heroes surround Rexor and deal the killing blow.  Victory for the players in the first game with all heroes surviving! 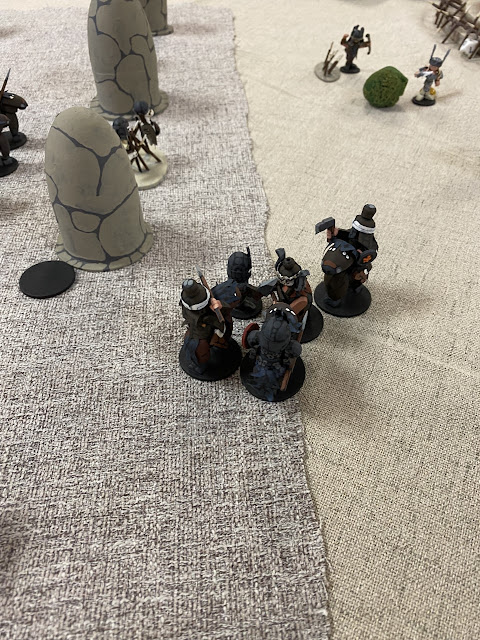 This was during the second game and Conan is in trouble!  Valeria and Subotai are too far away to help, and this second group used Akiro to protect the princess so he is far away at the back edge of the board at this point in the game.  This could have been real trouble for Conan but the player rolled really well and ... 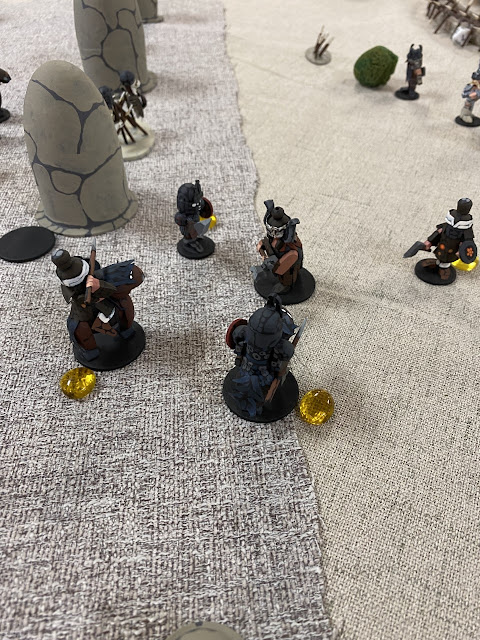 ... although they made their armor saves and survived, Conan won the melee combat against four enemies and drove them back, causing them all to be shaken by the defeat!  This was a turning point in this second game with the pendulum swinging in favor of the players! One added level of tension in this second game was that the heroes ended up having to fall back to the burial mound with the princess, which allowed the enemies to get closer to her and possibly killing her!  This is close to the climactic end of this game with three of the four heroes making their last stand at the base of the prince's burial mound.  Thorgrim is in the mix and Rexor is out of the picture towards the bottom but charging and would eventually arrive.  Akiro is still on top of the mound protecting the princess but would after saving her from Thulsa Doom's magical arrow make his way down and join the fray, casting his "Eye of Doom" spell at both Thorgrim and Rexor injuring them enough so that they could be killed off in melee combat with the heroes. 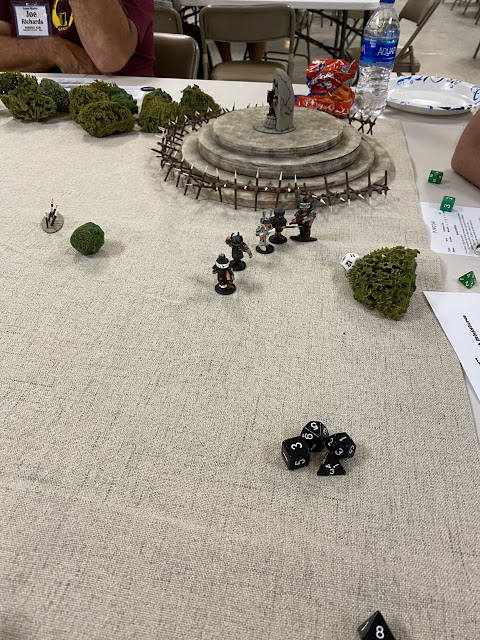 Interestingly, this game ended with the anti-heroes being killed and there was one remaining fanatical regular infantry enemy left alive, but we called the game here, there was no way he could possibly survive a melee combat against all four heroes at the same time!

Two very enjoyable games that in some ways were similar, but in others were very different.  It was easier for the horses to get past the heroes in the second game because of where the barriers were placed by the players, but they were still able to slow them down enough without a single enemy getting to the top of the princess's burial mound to try and kill her.  Both groups used great team work, which is the point of a co-op game, and I am very please with how these games went.  I hope to be able to run them again at Scrum Con this year.