Like most of us in the miniature gaming hobby, I am much more productive when I have an actual project to work on.  I do better with goals and things to aspire to where there is a measurable "end" to the project.  I decided that my next game for Barrage in September 2020 will be a Conan skirmish game based on the battle at the end of the classic 1982 movie often called the "Battle of the Mounds."  It's that great skirmish at the end of the movie between Thulsa Doom and his minions and Conan, Subotai, Akiro, and the spirit of Valeria.  As a game, it should please fantasy wargamers, fantasy rpgers, and even military wargamers alike.  Here is a still from the movie towards the end of the battle.  Conan and the large stone markers are clearly visible here. 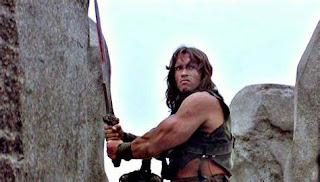 The board should be fun with the various mounds, funeral pyres, large stone markers, booby traps, etc.  The heroes need to have two of them survive the battle and they have to keep the princess alive until the end (she's chained to a stone but can be killed by anyone, including Thulsa Doom with a snake arrow just like in the movie).  I should be able to do the board no problem.  But what about the figures.

I've done enough games now to know that although I want to start with the heroes, it's best to end with them.  First, doing the other figures gives me even more practice so the heroes are more likely to turn out good.  Second, by doing the less interesting "fodder" figures first, I keep up my motivation for the heroes at the end.  If I do the heroes first, I lose interest in doing the run-of-the-mill fodder troops, so it's best to do them first.

There is already a scenario and map online for the current Conan boardgame that I am using for inspiration.  However, in terms of rules, I will use a variant of the ones I used for my Lord of the Rings games.  They seem to work very well for convention play.

So, what troops do I need?  For the baddies, I need 6 Black Guard troops, 6 Fangs of Set (and for each of these I need mounted and dismounted so that when they get knocked off their horses they can fight on foot if they are not killed).  I also need Lexor and Thorgrim as well as Thulsa Doom himself.  For the heroes, I need Conan, Subotai, Akiro, and Valeria.  Finally, I'll need to do a princess figure chained to a rock.  Not too bad!  I am feeling good about being able to get this project done in time for Barrage in September.

So far I have done one mounted and dismounted version of both a Fang of Set and a Black Guard figure as a test.  Here is a movie image of a Fang of Set speaking with Conan who is disguised as a priest.  I just love the armor and the helmet as well as the face guard. 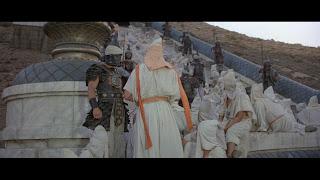 And here are my dismounted and mounted first try figures for a Fang of Set trooper. 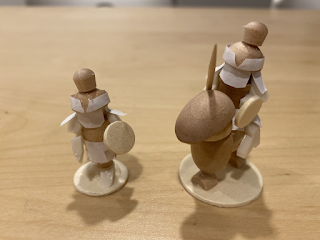 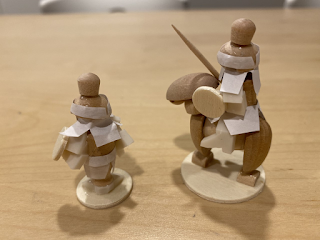 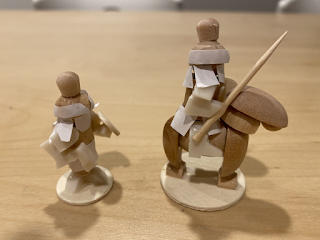 The construction is a bit involved, but I think they look pretty darned cool!  I got the helmet and the armor, the most distinctive features, to come out pretty well I think, and I can't wait to slap some paint on these guys to see if I can get them to look good.  I added a "lower jaw" to the horse head.  I hope it looks good when it is painted.  I also added "hooves" to the horse which is nothing but a split small plug glued flat-side down to the base.  This gives the horse more height, which it needed, and also makes it look more like it has hooves than my old way of just gluing the split egg directly to the base.

The Black Guard are a mish-mash of guys in the movie, but I want some consistency in my figures so I'm going for only one helmet and armor look.  I'm going for the helmet in the following picture for these figures. 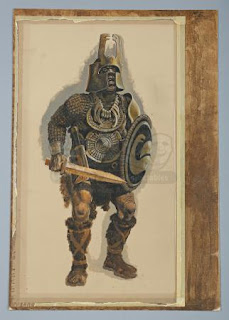 I am going to also give them larger shoulder pads that are painted sort of like a snake head.  Here is the mounted and dismounted first try for the Black Guard. 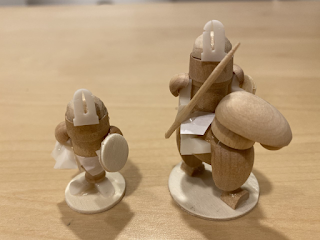 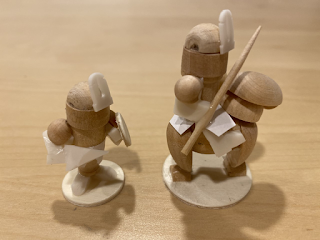 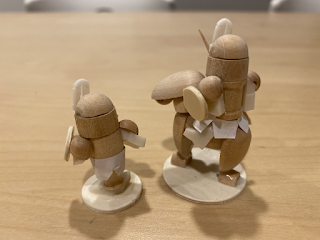 Can't wait to get some paint on these guys too!

So far so good, I'll post some painted pics when I get these guys done.