First off, Happy New Year everyone!  Sorry it has been so long since my last post to this blog, but working my job in a COVID environment has turned out to be very challenging and has been extreme time consuming.

That said, I wanted to continue on with some of my wooden fellows and I have several constructions done for the more detailed figures (let's just say I have done some "caped crusader" figures).  But if I am honest with myself, these more detailed figures while I do enjoy them, are not really what prompted me to make wooden miniatures for wargaming out of spools, toothpicks, and such.  What I have always wanted to do was create miniatures that anyone could make and paint to a standard that they would be happy putting on the table top.

I am not sure if this is present on this blog or not, I don't think it is, but way back, about a decade ago to the day honestly (I can't believe it has been that long!), my original intention was not to create miniatures for wargaming.  What I wanted to do was to make playing pieces for the game of Chinese Chess.  Those of you who are not familiar with the game, it is a wonderful type of chess that is related to the game that we all call "chess" currently but has some important differences.  First, it is less abstracted in its pieces.  The pieces are more consistent with the types of troops used in actual ancient warfare.  For example, there are elephants, cannons, and chariots as pieces in Chinese Chess.  Second, the board is slightly different in that there is a "river" in the middle and at least the soldiers ("pawns") behave differently when they are on their side of the river compared to the enemy side.  In summary, the game really is more akin IMHO to ancient warfare than is what we call today "chess," at least in terms of its pieces.

The problem I encountered was, however, significant in that the game is played with flat discs (similar to checkers) as playing pieces and on these discs is written using a single Chinese character the name of the piece.  First challenge I encountered was, you guessed it, I don't read Chinese.  Second, the same characters are not always used for the same pieces in the two armies.  For example, the "elephant" character in the red army is a different character than the one used in the blue army for the "elephant" piece.  Yikes!  This proved to be a very difficult challenge for me to overcome.  Not only would I have to learn the characters for the pieces, I would in many cases have to learn two sets of characters for each piece depending on the army.

The good news for me, however, was that there were some 3D Chinese Chess sets available with pieces that were shaped like the troop type.  For example, the cannons looked like cannons, the elephants looked like elephants, etc.  Great!  I was in business!  But the issue was that these sets were a bit on the pricey side (for me anyway).  So after looking at these pieces, I thought, "I bet I can make a serviceable set of pieces out of wood craft parts that would allow me to play Chinese Chess.  I can use these spools with these mushroom caps to make 'pawns', and I can use these candle cups tipped at a 45 degree angle with these little discs on the side as wheels to make cannons," etc.

But then once I did that it dawned on my that I could make huge armies for ancients wargames for very little money using these inexpensive craft parts and, equally importantly, with a simple paint scheme I could put hundreds of figures on the table top in not a lot of time.  And so that's what I did.  And since then, because of seeing the great work of all the folks out there that do more detailed figures, I started to do more detailed once myself.

I have decided, for a little while anyway, to return to my roots ... get back to basics ... to return to doing the simpler figures of a decade ago.  And further, to make pieces for board games that I really like.

Chess was an obvious choice, and I will do pieces for traditional chess eventually, but before that I have always wanted to do a homemade version of the old Parker Brothers' game "All the King's Men."  There are several variants out there, but this one is my favorite and it has a medieval theme.  Here is a picture of the game: 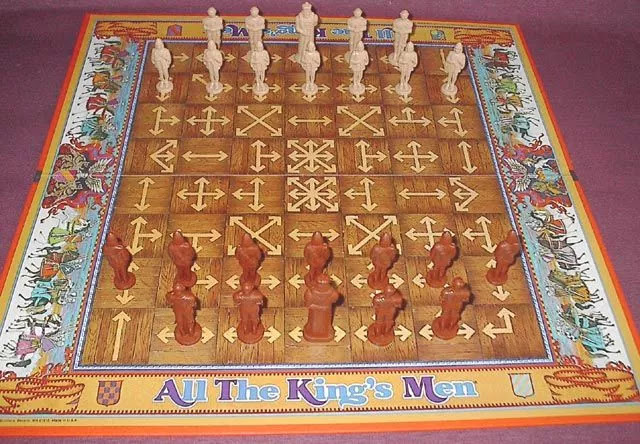 It is not the most popular of games, it is often seen as too simple and not challenging enough, but I have loved this game since my youth.  There are only three types of pieces, the King, four Knights, and seven Archers.  The King and the Archers each move one square.  The Knights can move any number of squares.  Fair enough, it is a very simple chess-like game, no doubt.  But the one thing that this game has that no other game at that time did (this was the late 70's) is that the board squares determine the direction the piece could move.  The distance in squares moved was established by the type of piece.  But the direction was dependent upon the arrows on the square the piece currently occupied.  It has been proposed by those who studied the game that this was done to simplify the movement of the pieces for beginners and make the game easier for even younger plays to enjoy.  Fair enough, I do think this is true.  But the wargamer in me saw something else, and it is what I have always loved about this game.  The squares effectively serve like terrain in a wargame.  If the square does not have a "forward" facing arrow in it, the piece cannot move in that direction.  This really is an abstraction of terrain in a wargame!

So, in an effort to return to my roots with crafting figures, I decided to make my own pieces for the game "All the King's Men."  The board?  I will try, but I know it is going to be difficult.  But I will try.

Consistent with the original, I am going to make a brown colored army and a cream colored army.  I am also sticking with the medieval theme of archers, knights, and a royal (I am going to do one King and one Queen however just for fun and also as a shout-out to the new Netflix series "The Queen's Gambit").  I am just going to use peg people and paint the designs on them to indicate the different playing pieces.  Keep it Simple Stupid approach here.  I am going to base coat all of the peg people in black and then paint the colors on top of this black base coat, being careful to use the "negative space" (in other words leave black showing throw) to create definition and a break between the different parts of the piece.  I am not shooting for something "realistic" or even necessarily proportional here.  In fact, I am only doing the figures from the waist up.  Instead, I am aiming for interesting looking playing pieces for a board game.  Also, I know that pieces of the same type will differ slightly from each other.  I'm okay with that.  This is supposed to be a "handmade" game, not a manufactured one.

Here are some photos of the brown colored army. 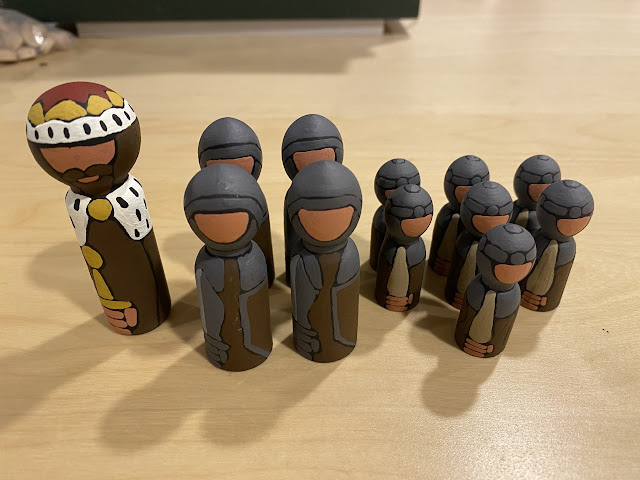 The King is about 3" tall, the Knights are about 2.5" tall and the Archers are 1.75" tall.  I did nothing to these pawns other than paint them.  The armor and weapons are somewhat abstracted, and I purposefully did not paint facial features on them.  This, along with their size difference, gives them more of a board game "playing piece" feel than a historical miniature wargame feel, which is what I was going for. 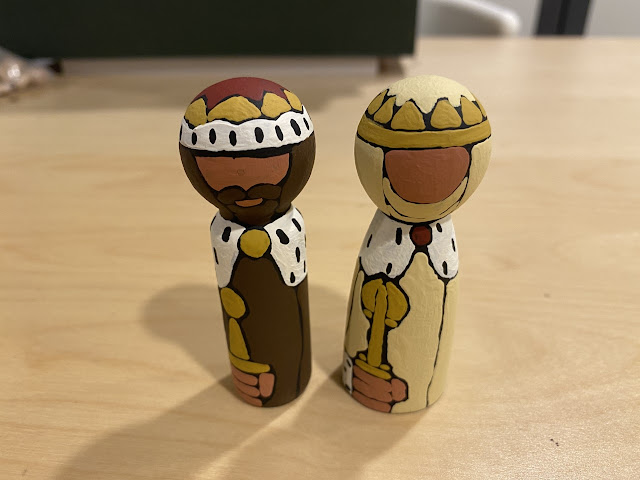 Here are the two "Royals" side by side, King on the left, Queen on the right.  Obviously I chose to use base colors for their outfits consistent with their army (brown and cream). 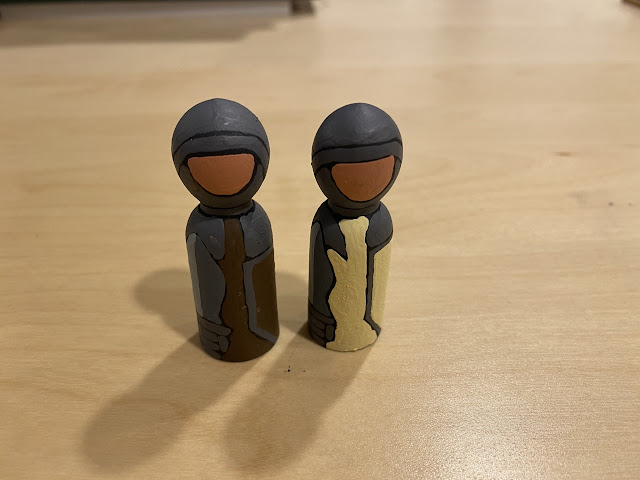 The Knights might be my favorite pieces.  I wanted them to have some plate armor on but also holding swords in their right hand and shields over their left arm.  So really, the plate armor is really only visible when looking at their helmet and their right arm holding the sword.  Again, I used the brown or cream colors to paint their surcoats as well as their shield front to make it easier to see in which army they serve. 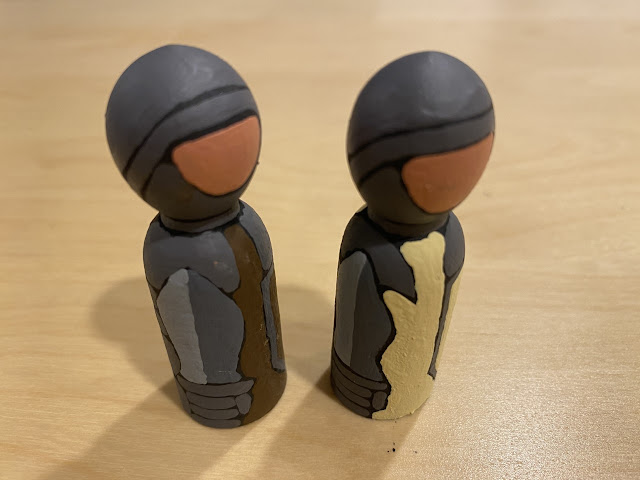 Here is a better shot of the sword.  Super easy to do and I like the way they came out. 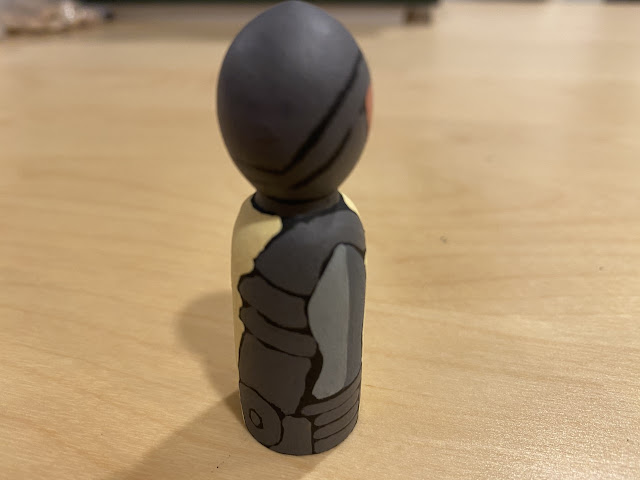 Here is a better shot of the right arm holding the sword.  Again, my goal was to create a "plate armor" look. 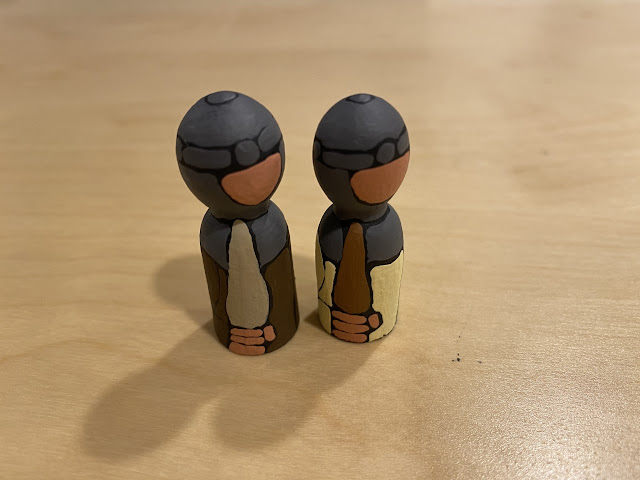 The archers were the first figures I did.  I couldn't decide whether to paint their mail head and shoulder covering as mail or just leave it gray.  I went with the more simple option of not painting the mail and just leaving it gray.  The bows they hold in hindsight I should have put in their other hand, but that's okay.  I used different colors for the bows to give more visual distinctiveness to these pieces as they are the smallest on the board.

The board will be tricky.  I have some ideas but even if I can't pull it off, I am happy with these playing pieces.