I have been in a constructing rather than painting mood of late.  So to take advantage of that I thought I would focus more on trying to get more dynamic leg positions.  My last effort was satisfactory, but I thought I could do better.  I think I have.

To enhance my motivation, I decided to try and make my three favorite characters from fantasy fiction.  One of them, Conan, I can do as part of the game I am working on.  So that would be making the Conan who fought at the Battle on the Ruins at the end of the 1982 movie.  He's cool looking, awesome helmet and lamellar armor, funky pants, how can you go wrong ... plus I need him for the game.  As much as I love Conan, though, my favorite fantasy character of all time is the Gray Mouser, with his companion Fafhrd.  Leiber's stories of the adventuring duo shaped me more than any other in terms of the types of rpg worlds and adventures I like to play in and run.  Obviously, my online name comes from this character as well.  So I thought choosing characters I love to try and make some figures in more dynamic poses would only enhance my motivation.

Let's start with my favorite character, the Gray Mouser. 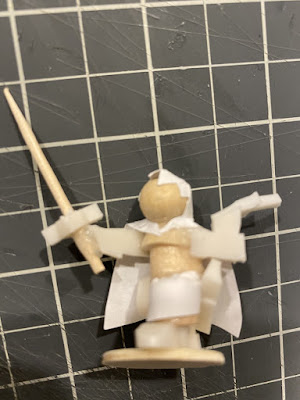 This is a good view of his head, arms, rapier, and torso, not so much the legs which is what I really want you to see.  Onto the next photo ... 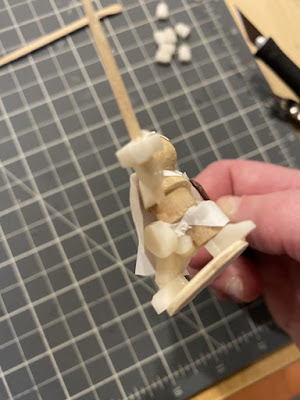 Ah, that's better.  His torso is a medium-small flat plug with a split bead glued on top to make the shoulders.  The left leg (the forward one) is a smaller flat plug glued to the edge of the torso plug bottom to create a lunging forward knee bent look.  The right/rear leg is made out of a tile spacer, just like the arms.  Both feet are tile spacers and they are glued flat onto the base for support.  The tile spacer leg is then glued onto the right foot, which isn't very stable ... again, tile spacer to tile spacer joints are always the weakest part of these figures.  However, since the left leg is a plug glued to the torso plug, this is very strong in terms of keeping the figure glued firmly to the base.  So I think this will work.  I used parts of a tile spacer to give him a "groin" (baggy pants look) and some paper to do the same thing around his forward leg (baggy pants/bent leg at the knee).  Not bad, I'm pretty pleased with him.  Here is another shot just to finish out the figure.  The cloak came out really good I think. 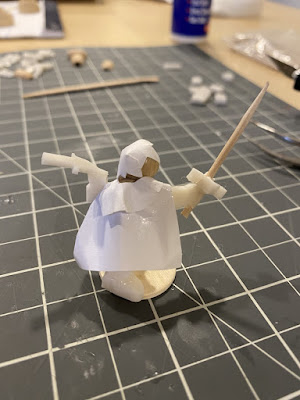 Classic Gray Mouser pose, lunging with his rapier "Scalpel" and getting ready to throw his dagger "Cat's Claw" at an enemy.  The rapier is obviously a toothpick ... I wanted a more slender sword.

Now onto Fafhrd.  The barbarian needs to be larger than the smaller Mouser and I wanted a barrel-chested look.  So I went with a barrel bead for the chest and torso, and a split oblong bead for the pelvis/groin area of the figure.  Here are some pics. 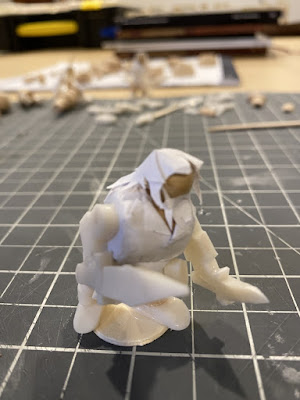 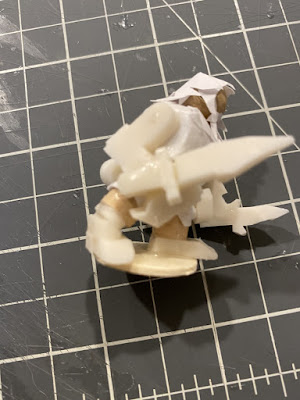 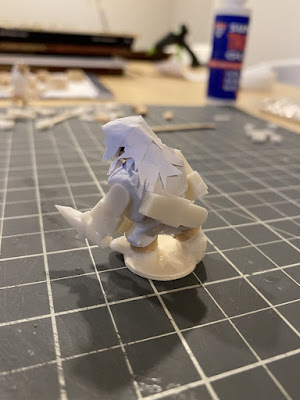 In the second picture you can really see the legs.  His left/forward leg is also a small flat plug and he is leaning (rather than lunging) forward a bit on it.  I also used paper to make the baggy pants look for him as well.  As with the Mouser, Fafhrd's feet are flat on the ground glued to the base.  The trickiest part with him was the right/rear leg.  I wanted to try and use a plug with him so I used the plug for the upper part of the leg, but the lower part is split tile spacer.  There are two pieces as you can see, and although it is invisible in these photos that "gap" you see between the two tile spacers is actually filled in with glue, so it will be solid when it is painted.

Here are the twain together.  You can get a better sense for their size difference in this photo. 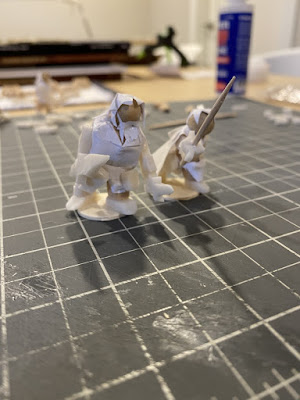 And now Conan.  This figure was very detailed.  Because he is supposed to be putting together a mish-mash of armor and weapons from the dead left long ago on this battlefield, he has a very eclectic appearance, but this makes for a complex figure to make.  But I like him too.  I didn't want his pose to be as "lungy" as Fafhrd and the Gray Mouser, and perhaps his legs may have turned out the best of them all.  Here is a photo from the movie that captures the look I am going for: 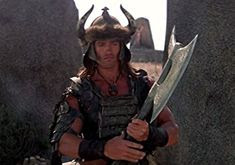 And here is the actual figures. 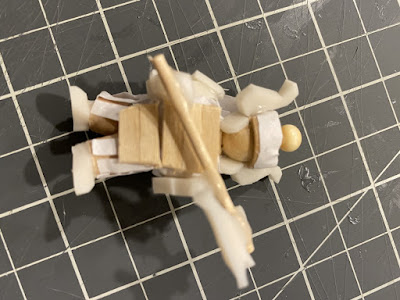 Can't see well in this photo but he has the same torso and pelvis construction as Fafhrd, he just has small flat plugs for both legs.  The paper strips are the leather strips he has on these funky pants in the movie. 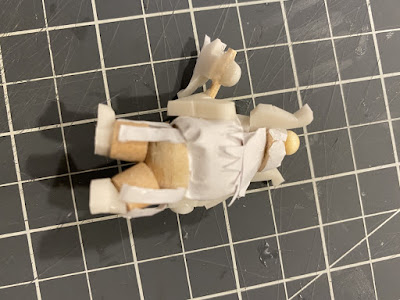 You can see the legs a lot better in this one.  His upper torso is a barrel bead on its side (open ends are where his arms are).  The pelvis you can see very clearly here is a split oblong bead.  The legs are both small flat plugs with tile spacer feet.  You can see I have a 45 degree piece of tile spacer added to his right foot so that he can be leaning forward a bit.  Essentially, the front plug for his left leg is vertical and if this was a real person most of his body weight would be on that leg.  The right leg is stretched out slightly behind him.  Not the lung of the Gray Mouser or Fafhrd but enough leaning to give the figure a more dynamic pose. 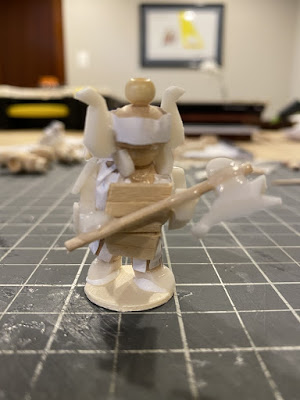 Here he is glued to his base.  The helmet came out great I think and wasn't that tough.  His head is a small split bead glued onto a larger split bead to make up the bowl of the helmet.  Paper is glued around this and will be painted like fur.  A small bead was glued on the top and the "horns" are obviously just cut tile spacers.  Since the split beads still have half a hole on each side from being split, this provides a nice hole to glue the horns into.  I just cut that end of the horns down into sort of a "tab" that just fit into the hole in the head/helmet piece on each side.  Easy and also very sturdy once the glue dries.

This is a picture of the "barbarian's" torso and pelvis.  It's hard to see with all the paper I'm using now but I have come to really like paper for these figures.  I literally can if I keep at it and keep trying, make pretty much any shirt, belt, pants, etc. that I need.  But when I glue it all over the figure it becomes hard to see the wooden "skeleton" pieces. 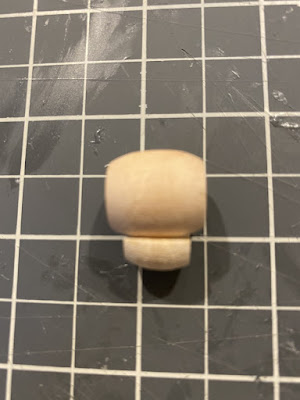 Hopefully they will paint up well!
Posted by GrayMouser65 at 10:57 AM